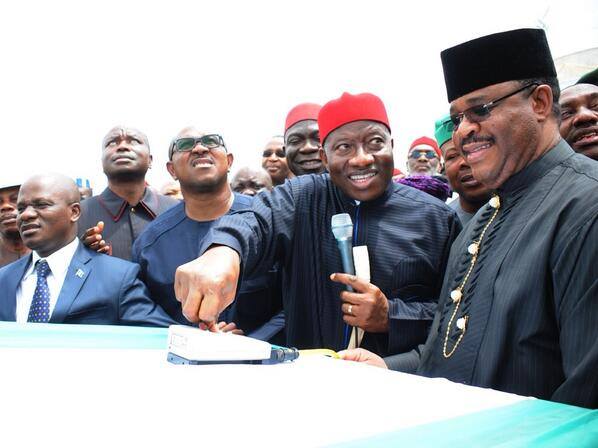 A cross section of prominent Nigerians on Monday commended President Goodluck Jonathan for initiating the construction of the Second Niger Bridge.

The Obi of Onitsha, Nnaemeka Achebe; former Senate President, Ken Nnamani, and All Progressive Grand Alliance, APGA, Chairman, Victor Umeh, made the commendation when they spoke to the News Agency of Nigeria in Onitsha on Monday.

Mr. Achebe said that the bridge would play a great role in the lives of all Nigerians.

He said this was so because the bridge would connect the south to the west and the north to the south and east.

“The construction of the bridge means a lot to us in Anambra; apart from the fact that it will increase commerce, it will also bring Nigerians closer to each other.

“It is a national project and it will help in transforming the nation in a very good way.

“The Federal Government has done its part by financing the project and we the locals on ground would make available a secured environment for the contractors to work and ensure peace.”

He, however, urged the contractors to work effectively to deliver a quality job and on time.

Mr. Nnamani expressed happiness that President Jonathan had finally delivered the project after many administrations failed.

He said the construction of the bridge meant increased economy for all the zones of the country.

“If this project succeeds as I know it would, it must have opened a new chapter of PPP in funding infrastructure in Nigeria.

“Everywhere the world over, the government is tapping into the PPP since it cannot fund infrastructure alone.

“So if this one succeeds it will be a good example for other projects.”

Mr. Nnamani, who is also the Chairman of the Infrastructure Concession Regulatory Commission, said that steps would be taken to effectively monitor the project to ensure that it complied with the ICRC Act of 2005.

In his reaction, Mr. Umeh lauded the president for the “giant stride” in the construction sector.

Mr. Umeh said that this was the first time Nigeria would have such a huge amount of project being done with availability of funds from the beginning. He said this showed that the project would be delivered on time and Nigerians were sure of its completion.

Mary Nwosu, a trader, said the bridge would open up markets and make food items to be very cheap.

“We always travel to Asaba and other states for trade but the hold up on the bridge makes drivers to charge us highly.

“I’m sure when the bridge is completed, we would have more cheap products and we won’t need to spend all those hours travelling to buy things because the road will be shorter,” she said.

She also thanked the government for the initiative, adding that “when December comes there will be no fear of hold-up because there will be more routes to ply.”