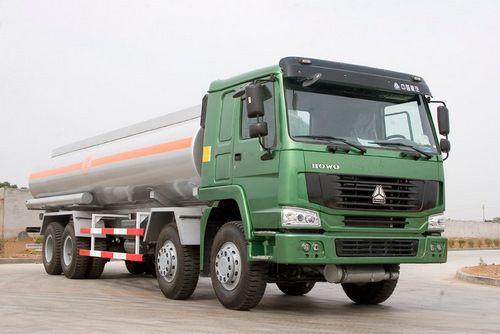 An articulated truck conveying a petrol tanker ran over a car
Two passengers in a saloon car were feared dead early on Friday as a tanker transporting petroleum products on the Auchi-Okene Highway ran over their vehicle.

The tanker was said to be coming from Lagos.

A witness, Ahmed Ibrahim, said that the tanker driver lost control and crushed the driver and another passenger in the  car.

“The tanker driver was coming from Lagos and suddenly ran over the Toyota car coming from the opposite direction, killing the two passengers inside the car,” he said.

A correspondent at the scene of the accident observed that the content of the tanker spilled on the surroundings after the accident, while some motorists and residents around the scene scooped the
commodity.

Officials of the Special Anti-Robbery Squad, SARS, later arrived at the scene to chase the people away, for fear of a possible explosion.

The people defied the presence of the SARS officials as they continued to scoop the commodity, especially having experienced its scarcity in the area, for some time.

Some officials of the Federal Road Safety Corps, FRSC, were also immediately available to control traffic on the highway.

Some FRSC officials were directed to deposit the bodies of those victims in a public mortuary at Auchi, while they also made attempts to contact their families.