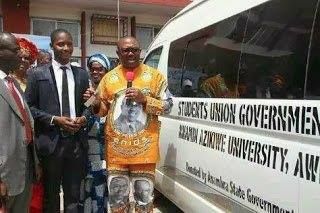 The Nnamdi Azikiwe University, Awka, has received yet another assistance from the Anambra State Government.

Peter Obi, the Anambra State governor, during a visit to the school on Friday, donated N100 million to the institution.

The governor asked the university to use the money to rehabilitate roads  within the institution.

In addition to these, the governor promised to reward all first class graduates from the university with N1millon each.

The Vice Chancellor of the institution, Boniface Egboka, represented by the Deputy Vice Chancellor Administration, Greg Nwakoby, thanked the governor, saying his gesture further underlined the fact that he has the interest of the education sector at heart.

Speaking at the occasion, the director of the University’s Ekwueme Centre for Multidisciplinary Research, Israel Okoye, noted that the governor had laid a good foundation for future leaders through his assistance to various institutions including the Nnamdi Azikiwe University.

The President of the University’s Students’ union, Ibe Cico, while receiving one of the keys to the new buses donated to the SUG by the governor, pledged to provide effective leadership for students of the university.

Also on Friday, the department of political science of the institution inducted new students and inaugurated her newly elected students’ executive and legislative members.

Ignatius Ngini, the past President of the National Association of Political Science Students, NAPSS, in his handover speech, urged the new government to live up to expectation.

He also expressed his appreciation to the head of department, lecturers and members of his administration for the wonderful support they gave him and urged them to extend same to his successor.

He however lamented that the legislature failed to pass a single bill during his regime and urged the new legislative members to cooperate with the executive and live up to expectation.

In his inaugural speech, the new NAPSS President, Emeka Omaliko, promised to live up to expectation and move the association to a higher level.

The Head of Department, Makodi Nnabugwu, urged the new students as well as the executive and legislative members to deliver on their promises to their association.