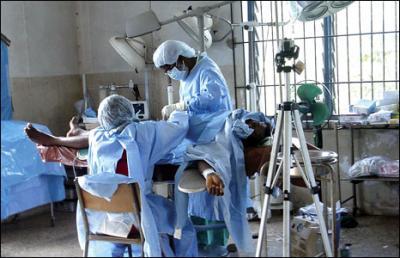 Health workers are on strike nationwide.

The strike action embarked upon by the Medical and Health Workers’ Union of Nigeria (MHWUN), on Thursday paralysed activities at the Federal Medical Centre, FMC, Yenagoa.

The News Agency of Nigeria correspondent who visited the hospital reports that almost all the offices were empty, with few of the staff, mostly nurses, carrying out skeletal duties.

The Chairman of MHWUN, FMC Wing, Barnabas Simon, said that the union had commenced industrial action in line with the directive from its national body.

“In line with the directive of our national body, we at the FMC, in Yenagoa, have commenced an indefinite strike.

“We have been asked to down our tools and that is what we have done this morning,’’ Mr. Simon said.

Another official of the Union, who pleaded anonymity, said that although the union had commenced strike, patients on admission were still in the hospital,.

He, however, said that nurses on duty were carrying out skeletal duties.

“As you can see, the patients are still on their beds. We have not discharged anybody, but other administrative works have been halted.

“Anybody you see around is only carrying out skeletal duty,” he said.

A patient, Hope Orugbo, however, said that although the strike had commenced, the union had been magnanimous by allowing the patients to remain in the wards

“I heard about the strike this morning, but thank God that the nurses have been very caring and kind. We are still here in the hospital but we don’t know what may be their next action.

“I want to appeal to the government and the union to consider the negative impact the strike will have on the patients.

“Let them resolve their differences for the sake of the patients, many of whom are in critical conditions,’’ Ms. Orugbo said.