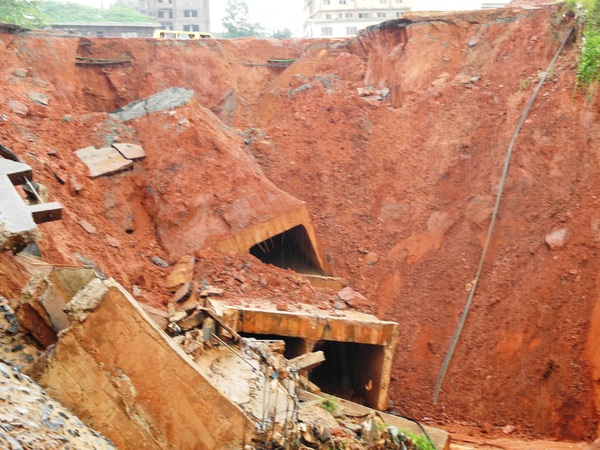 The affected council chairman asked the state and federal government to come to their aid.

Residents of Odongbu-Amogbeke and Akponge-Amoju in Ezimo, Udenu Local Government Area of Enugu State have been sacked by gully erosion while seven other communities are being threatened by the menace.

Conducting members of the Enugu State Assembly Committee on Environment round the devastation, the Deputy Chairman of the council, Natty Eze, said the people were now scattered in neighbouring villages.

Mr. Eze said they currently lacked lands for agriculture which was their main occupation. He listed other areas affected by the menace to include Mkporogwu-Ezimo-Ulo road, Ugwu Odor-Uruneya erosion site in Udunedem ward.

Others are the two erosion sites at Obollo-Afor, four at Amalla community, Ama-Orba and Iyi-Opu Ozalla erosion site which he said were beyond the financial capacity of the local government.

Mr. Eze said the council had controlled the erosion site at Umuezejo-Obollo-Afor and appealed to the state and federal governments to come to their aid. He commended the assembly committee on environment for their foresight in collating data on ecological disasters threatening the state.

Responding, the Chairman of the committee, Donatus Uzogbado, called on communities in the area to imbibe and revive the culture of road maintenance by checking erosion at its onset.

Uzogbado said waiting for the government to do all things even when people in the community were facing environmental threats was not the best.

The chairman advocated for the involvement of community leaders in the control or prevention of environmental degradation to monitor quality of work by contractors.

He said the committee was on the environmental audit of the 17 LGAs to bring them to the front burner of discourse for prompt action by the government.