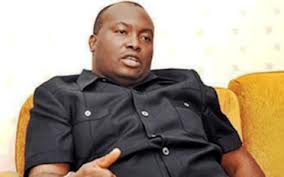 Accuses governor of instigating his probe over oil subsidy scam.

At the same time, he carpeted the incumbent, Peter Obi, for making discreet moves to stop him from entering the race.

Mr. Ubah, proprietor of Capital Oil Nigeria Limited did not, however, indicate the party on which he would run for the governorship seat. He told journalists in Abuja that if elected, his cardinal programmes would be focused on education, security, industrialization and employment.

He promised to reduce crime rate in the state to near zero level by employing a new telecommunications system to combat crime.

On employment, Mr. Ubah said he would ensure the establishment of cottage industries in every local government area of the state, adding that each of the factories to be built, would have a dormitory where the staff would live.

According to him, the workers would be given new orientation that could help to move the state forward.

He alleged that Mr. Obi had sought ways to stop him from entering the race because he (Mr. Ubah) advised him to conduct local government election in the state.

Mr. Ubah restated that the governor instigated the Federal Government to investigate him on the alleged N46 billion petrol subsidy scam.

The oil magnate is accused of fraudulently obtaining the money as subsidy for imported petrol without actually doing any importation. He was arrested, detained and has been charged to court over the allegations. He has in the past blamed his ordeal on Mr. Obi; the Minister of Finance, Ngozi Okonjo-Iweala; and others; linking them all to Anambra politics.

A former Speaker of the House of Representatives, Agunwa Anaekwe, who was at the event, said that Mr. Ubah has the exposure and the clout that could make him become the governor of the south eastern state, adding that having invested heavily in Lagos and other parts of Nigeria, he would replicate same in his home state.

Mr. Anaekwe added that one of the criteria for anybody aspiring to rule any state should be the person’s track record. He said that the only way to put to an end the present imbroglio in Anambra politics, would be to identify with Mr. Ubah, who he claimed has such a record of performance in his community, the state and Nigeria in general.