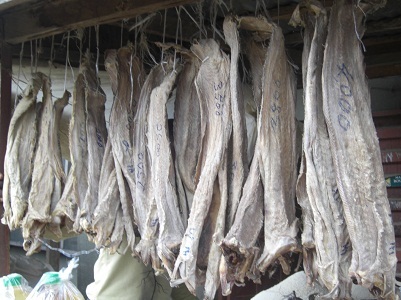 The importer of the fish said that though such loss is not strange, this one was particularly enormous.

The National Agency for Food and Drugs Administration and Control on Friday destroyed stockfish worth N20 million in Aba, Abia State.

The agency’s Assistant Chief Regulatory Officer at the Aba Special Zone, Emeka Onwuasoanya, said in Aba that the stockfish was mopped up from two containers.

Mr. Onwuasoanya said the 500 bags of stockfish were discovered to be spoilt following their exposure to rain while in transit.

He said the inspection was done with the cooperation of the importer, adding that the loss would have been avoided but for some lapses.

Mr. Onwuasoanya, however, commended the importer for giving the agency the required support during the inspection.

“It is true the company lost huge sum of money, but the destruction was inevitable to avoid being consumed by unsuspecting buyers,” he said.

The Managing Director of KC Nnodim and Sons Ltd., Emmanuela Okorie, the importer of the goods, said the stockfish, imported from Norway, got bad through the leakage of containers while on the sea.

“We imported the goods from Norway and during off-loading, we discovered that most of them were damaged,’’ she said.

She said the problem was normal in such business, but the loss in the present transaction was enormous.

Ms. Okorie said she lost 90 per cent of the goods with the money borrowed from banks, adding that there is no insurance cover to recover the amount.

She said most insurance companies shied away from the business because of the carelessness of shipping companies.

“I really felt bad, particularly in this very one, where I lost 90 per cent of the goods to water leakages,’’ she said.

Court remands couple in prison for assault on neighbour, theft