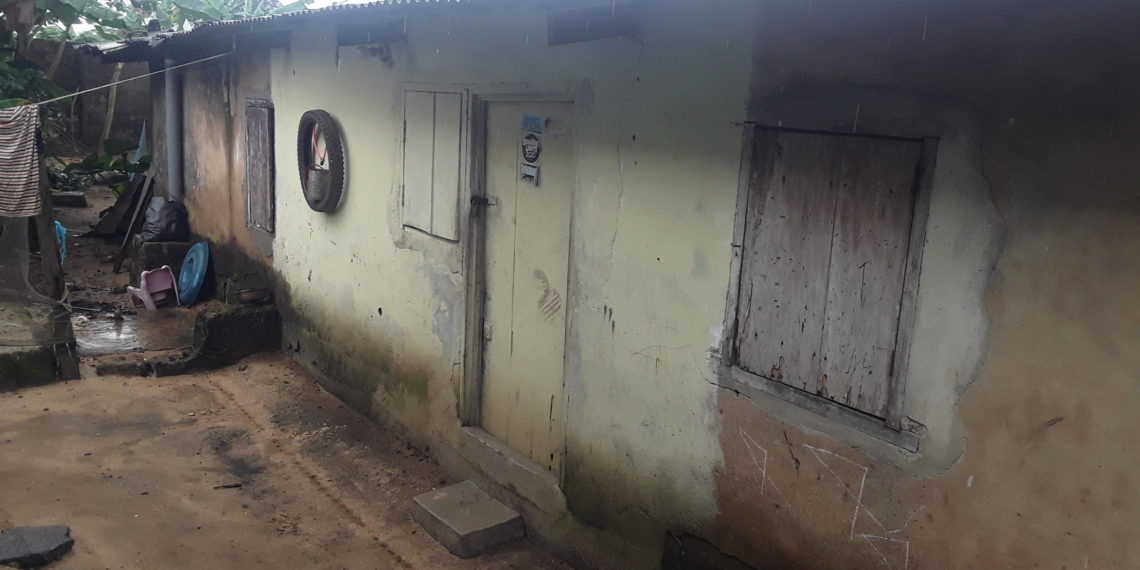 The frontage of Uduakobong's room

The police have vowed to unravel the cause of the death.

The cause of death of three family members after eating rice and pepper soup, two weeks ago in Uyo, Akwa Ibom State, has remained a puzzle.

There was palpable tension in Obio Etoi, the community where the tragic incident occurred, days after the bodies of two sisters, Uduakobong, 30, and Blessing, 18, and the seven-year-old daughter of the late Ms Uduakobong were recovered from their room.

Sunday Peter, the youth leader of Obio Etoi, told PREMIUM TIMES that the community was still in shock and apprehension, as the cause of death remained unknown.

Mr Peter said the different claims made by different people on the cause of death has made many in the community suspicious.

“The evening that they came back, it was raining. According to the information that I got, they bought the rice they cooked. When a rice is cooked, the top of it is well-set such that if someone tampers with it, you will easily know. What the three of them ate was very small. It was not even up to a cup of rice.

“Some of our community people said if the rice was poisoned, the colour would have changed after staying overnight. It was white rice and pepper soup. The rice was still white by the time people broke into the room and found the bodies,” he said.

People initially thought the three probably died of carbon monoxide from a generator fume but that was ruled out after the discovery that there was no generator near the room they slept, the youth leader said.

“The following morning, we had another information that those people (who died) came back with a takeaway pack. People suggested it must have been something they ate from the takeaway pack.

“Some people were even accusing the landlord. And when we asked the landlord, he said he knew nothing about it. 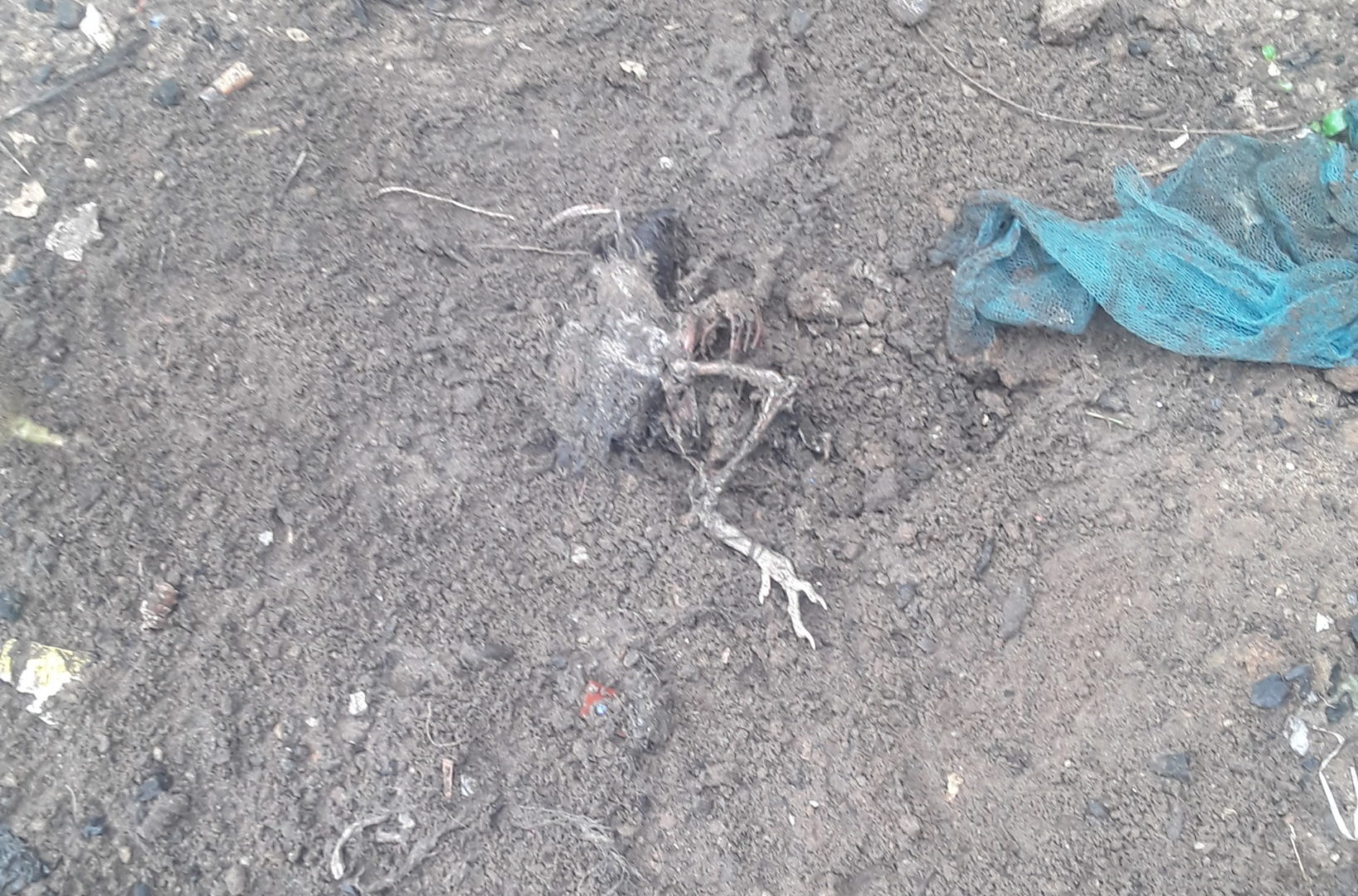 “These are all mere accusations. People in the community are just thinking of different things,” Mr Peter added.

Late Ms Uduakobong moved into the one-room apartment in 2013 and was later joined by her sister, Blessing. They had lived together till Ms Uduakobong gave birth to her daughter.

Their cubicle-like room was partitioned off from the main house, an old bungalow.

The landlord, Sunday Asukwo said the victim’s relatives, who are accusing him of being responsible for the tragic incident, claimed a soothsayer told them that he saw a vision of him (the landlord) selling rice to Ms Uduakobong.

Mr Asukwo denied having a hand in the deaths.

He accused Ms Uduakobong’s in-law of tampering with the scene of the incident before reporting to the police.

“The dead girl was living in the backyard. She was living with her sister until she grew up and decided to live alone. She has lived there for almost 10 years and nothing has happened until this incident.

“She is a trader, she goes out in the morning and comes back in the evening. I saw them on Monday when they went out but I did not see them on Tuesday, all day. It was later that day that their in-law, a keke driver, shouted that they had died inside the room. So we broke into the room and saw three dead bodies. That’s all I know.

“We saw the rice that they cooked inside the room and ate. Some are saying that it was food that she brought home in a takeaway pack that killed them. When that incident happened, the in-law entered the house and arranged the things in the house. He disposed of the takeaway packs.

“He swept and cleaned the room before going to report to the police. He even took the phone that was in the room. I don’t know if the police are using the phone now during their investigation. Why did he do that? He should have left everything for the police to come and see. It was his second son that brought the takeaway packs and showed us. The man does not want to tell the truth. He knows about the death of those people,” he said.

Mr Asukwo said the estranged father of Ms Uduakobong’s daughter came to him and threatened to burn down his house because of the incident.

The man, he said, accused him of being responsible for his daughter’s death, but had since gone into hiding when the police demanded proof.

…And the chicken ‘died’ too!

Reacting to the landlord’s allegation, Effiong Udo, an in-law to the late Ms Uduakobong, said he was sure that the rice the three ate was poisoned. He said the remnant of the rice was fed to a chicken on Wednesday, and by Thursday morning the chicken died.

The landlord denied knowledge of the chicken incident.

But Mr Udo, in order to buttress his point, dug the earth near the late Ms Uduakobong’s room and brought out the carcass of a chicken, in the presence of a PREMIUM TIMES reporter.

“My tenant is the owner of the chicken,” he said.

“Many people were here when we gave that rice to the chicken and it was up to 30 minutes, the chicken started shaking. The next day, it died.”

Mr Udo denied the landlord’s claim that he tampered with the scene of the incident and disposed of the takeaway pack.

“A Winner’s Chapel pastor had a birthday on Sunday. The big people were served food in breakable plates but the children were served in takeaway packs. They brought this food from the birthday (celebration) on Sunday, ate and they dropped the takeaway pack in the dustbin by themselves. That was on Sunday. But this incident (their death) happened on Monday night,” he said.

Mr Udo’s tenant, Augustine Abraham, confirmed to PREMIUM TIMES that he saw when the rice was fed to his daughter’s chicken and it died.

“That was my daughter’s chicken. It ate the rice and the next day, it died. I cannot say what I don’t know.”

The police spokesperson in Akwa Ibom, Odiko MacDon said the police were investigating the case to unravel the cause of the death.

The remains of Uduakobong and Blessing had been released to the family, both have been buried.

However, the remains of the little girl were yet to be released as the police are still looking for the father who accused the landlord of being responsible for her death.