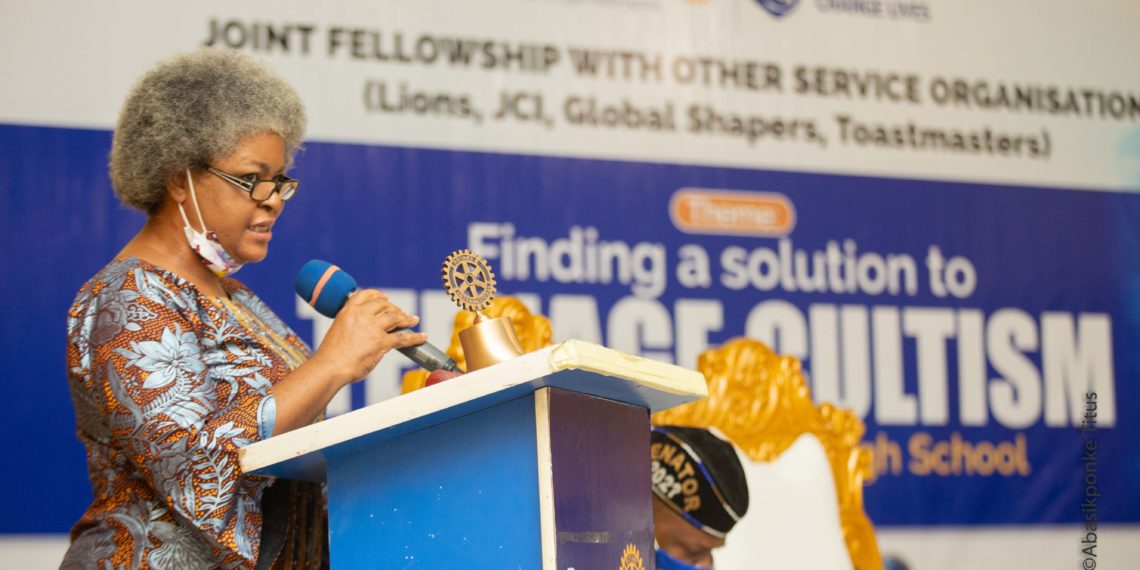 Mrs Obot Bassey, head of NDLEA, Akwa Ibom State, making her remarks about cultism and drugs in the state

26-year-old man was also arrested on August 6 in the state with 1.2301kg of cocaine worth about N25 million, says NDLEA.

Obot Bassey, who heads the agency in Akwa Ibom, also said a 26-year-old man was arrested on August 6 in the state with 1.2301kg of cocaine worth about N25 million.

She said the 1.2301kg of cocaine was the highest seizure in the past 18 years in the oil-rich state.

Mrs Bassey disclosed this on Sunday in Uyo during a discussion on the solution to teenage cultism in the state.

The discussion, hosted by the Rotary Club of Uyo Metropolis, District 1942, focused on a public secondary school in the heart of Uyo – Uyo High School – which is notorious for cult-related violence.

The school, with over 4200 students, was temporarily shut down in June after students, suspected to be cultists, threatened to attack the principal for suspending their fellow students.

Properties, mostly cars, are usually damaged by stones and bottles thrown recklessly by students whenever such clashes occur.

“It’s been established beyond reasonable doubt that the bedrock of every crime is tied to hard drugs,” the NDLEA commandant, Mrs Bassey said on the role of drugs on teenage cultism.

In his opening remark, the president of the Rotary Club, Uyo Metropolis, Ini Ememobong, said it was “strategic” to discuss the problem of cultism in Uyo High School.

Mr Ememobong, who is the commissioner for Information in the state, said recommendations from the discussion would be forwarded to the state government and relevant agencies.

COVID-19: Nigeria’s 4th place response ranking not ours – WHO