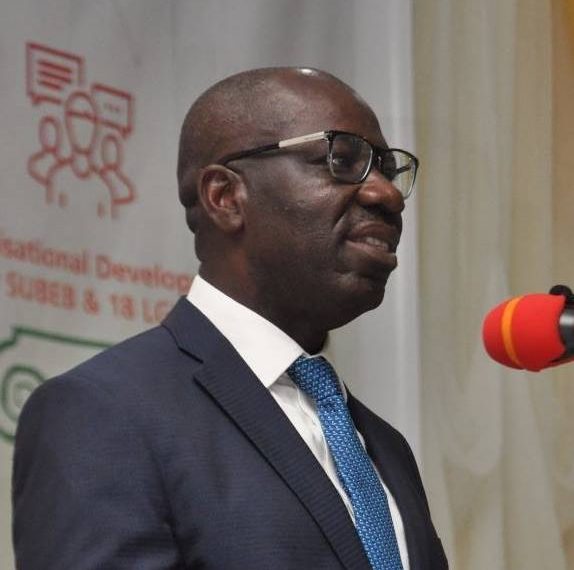 Mr Godwin Obaseki has been criticised for the delay in forming a cabinet.

The Edo State Governor, Godwin Obaseki, has finally begun the process of forming his cabinet five months after he was sworn in for a second term on November 12, 2020.

The governor’s 15 nominees for appointment as special advisers were cleared on Monday by the Edo House of Assembly.

The House on Monday cleared 15 nominees for appointment as Special Advisers to Governor Godwin Obaseki.

Mr Obaseki’s request for the approval of the appointment was conveyed to the House by the Secretary to the Edo State Government (SSG), Osarodion Ogie.

The Majority Leader of the Assembly, Henry Okhuarobo, had urged members to approve the governor’s request, adding that it was the first step to constituting the state executive council.

The Speaker, Marcus Onobun, directed the clerk of the Assembly, Yahaya Omogbai, to convey copies of the approval to the governor for “immediate action” after the lawmakers’ unanimous vote.

Mr Obaseki’s delay in forming his cabinet has been criticised by the opposition All Progressives Congress (APC) and some residents of the state.

Mr Obaseki had shortly after his inauguration re-appointed Mr Ogie as the SSG. No other appointment has been made since then, prompting the APC spokesperson in the state, Chris Azebanmwan, to accuse the governor of running Edo State as a sole administrator.

“There are some policies and actions of a state that legally and constitutionally should not be undertaken without the approval of the State Executive Council. As we speak, some of those actions are being taken solely by Godwin Obaseki as a sole administrator. He has not displayed the tendencies of a democratically elected governor,” Mr Azebanmwan said in February.

Shaka Umaru, a resident of Auchi, said the drafters of the constitution understood that having a functional state cabinet would allow room for a multiplicity of ideas to run the state.

He added, “Unfortunately Mr Obaseki has denied the Edo people the benefit of the collective wisdom of ideas. So, he is running the state like a sole administrator not like a democratic governor and this portends great danger for the democratic processes in the state.”

A rights activist and lawyer, Douglas Ogbankwa, said not having a cabinet has denied the state of having a representative from different strata in the running of government as provided by the constitution.

“This gives the governor of a state an opportunity of picking the brains and skills of members of the SEC, through the weekly council meeting before making vital policy decisions. This vantage position is currently lacking in Edo due to the failure and refusal of the governor to constitute the SEC,” Mr Ogbankwa said.

Mr Ogbankwa continued, “The constitution provides that each local government of the state shall provide at least one member of the council. This brings about inclusive government and gives each of the local governments in the state a sense of belonging in the running of the affairs of the state. Sadly, this situation is currently lacking in Edo State.”

The Peoples Democratic Party (PDP), in its defence of Mr Obaseki, said the delay was not a violation of the Nigerian constitution.

“The governor is well within his legal rights in forming his cabinet and I am sure at the appropriate time the cabinet will be set up to tackle the myriad of problems that need to be solved in Edo State,” the PDP spokesperson in Edo, Chris Nehikhare, said in February.

“This period that the cabinet has not been set up, the governor set up a high-powered team to look at the reforms which is one of the cardinal areas he campaigned on by trying to make Edo State great again,” he added.

Mr Obaseki won his re-election on the platform of the PDP in the September 19, 2020 gubernatorial election held in the state. He defeated the candidate of the APC, Osagie Ize-Iyamu, by a wide margin.

The governor had defected to the PDP from the APC when he was denied a return ticket of the party.

Reporter’s Diary: How Akwa Ibom CJ ordered my arrest for covering her court