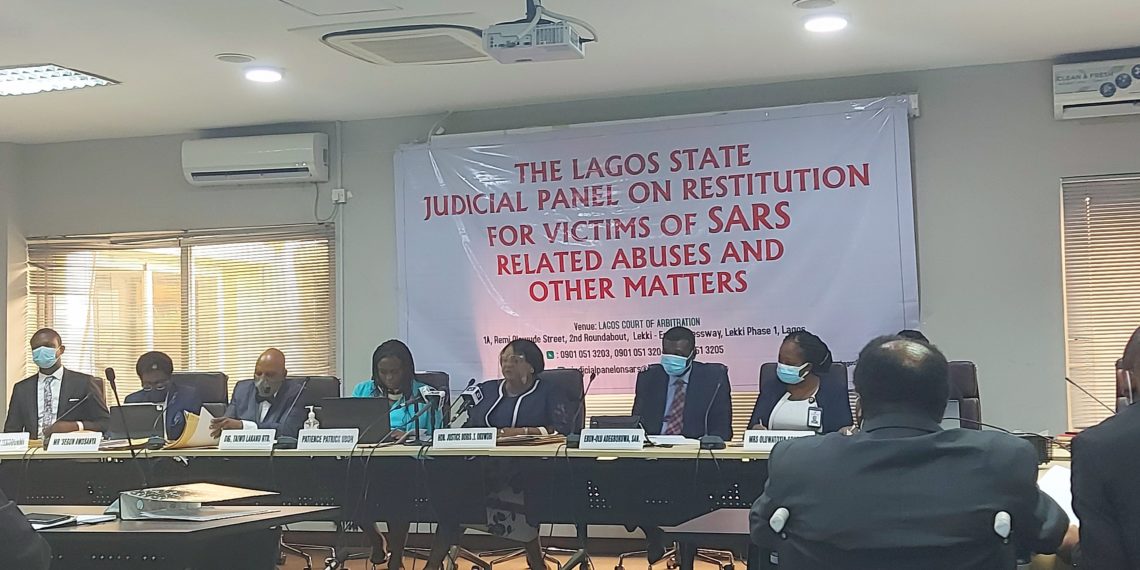 The woman claims her husband ''was whisked away by the police'' eight years ago. Pix: Edo panel

A woman, Rita Okungbowa, on Monday told the Edo State judicial panel of inquiry for ‘victims of SARS’ and related abuses that she had not seen her husband since he was whisked away by the police eight years ago.

Mrs Okungbowa, who is demanding N20 million as compensation for her missing husband, said they (defunct Special Anti-Robbery Squad) might have killed him.

Narrating her ordeal to the 22-member panel sitting in Benin City, she said operatives of the disbanded unit invaded their house and whisked her husband away, adding that his whereabouts was unknown to date.

She said her missing husband, Osayande Okungbowa, who was a movie director, was tagged a kidnapper before he was taken away.

The distraught woman said all efforts to trace him had been unsuccessful, adding that she went to the Medium Security Correctional Centre in Benin City to display his pictures ”but the prison authorities denied seeing any person like him.”

Mrs Okungbowa told the panel that having waited till date, she was left with no option than to conclude that he might have been killed by the officials of the disbanded SARS.

She said, “On the 12th of September, 2012, the SARS came to my own house and picked my husband, they alleged him to be a kidnapper.

“My mother-in-law and I went to the State Criminal Investigation Department, and immediately I mentioned the name of my husband, they drove us away. They did not allow us to see him.

“The next day, we also came, they did not allow us to also see him. So, one of the police officers then told us that they have taken him to the court and thereafter to prison.

Mrs Okungbowa added, “I decided to take a lawyer, and when we got to the station, the OC (Officer in Charge) then asked, who is in charge of the matter, they told us one Sergeant Esezobo was the Inspection Police Officer, IPO.

She added that she had been visiting the police station since then but had not seen him for over eight years.

“I have been going to the police station to search for him (my husband) and I have not set my eyes on him for the past eight years and because of that, I decided to approach the panel so that they can help me ask the disbanded SARS where they kept my husband,” she said.

The distraught woman pleaded with the panel ”to compel SARS to compensate her to enable her to give her children a better life.”

“They should pay me N20 million because I have been passing through hard times. Look at my two kids, they have not been going to school for a very long time,” she pleaded.

The 22-member panel headed by Ada Ehigiamusoe, a retired judge, adjourned the sitting to Tuesday.