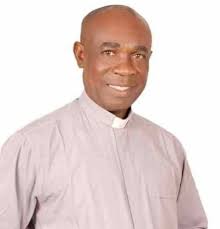 A Catholic priest, Jude Onyebadi, has been kidnapped by gunmen in Delta state.

PREMIUM TIMES learnt that the reverend father was kidnapped on Saturday in Aniocha North Local Government Area of the state.

He is the parish priest of Saints Peter & Paul Catholic Church, Issele-Azagba, a neighbouring community to Asaba, the state capital.

This is the second time the priest has been kidnapped by gunmen.

It was gathered that the cleric was abducted at his farm on the Isele-Uku/Issele-Mkpetime Road on Saturday.

He was said to have gone to inspect his farm and pay the staff their salary when the gunmen trailed him to the area and whisked him away.

They also reportedly kidnapped three of the farmworkers alongside the cleric.

However, the three workers were reported to have been released at about 11pm on Saturday.

He said the matter has been reported to the security agencies and that members of the church have embarked on prayers for his release.

Mr Uganwan pleaded with the kidnappers, who may not know that he is a priest, to release him unconditionally.

He said the kidnappers had not made any contact or demanded ransom from them.

Mr Onyebadi was first kidnapped on the same farm in 2018 but was later released few days after the abduction.

His abduction in 2018 led to protest by Catholic priests in the Isele-Uku Catholic Diocese.

The police spokesperson in the state, Onome Onovwakpoyeya, confirmed the abduction of the catholic cleric.

She said the command had already deployed officers to the area with a view to rescuing him.

“The police have been dispatched to the bush to rescue the Catholic Priest,” she said.

INTERVIEW: Why Calabar, Warri ports are not functional — NPA Chairman