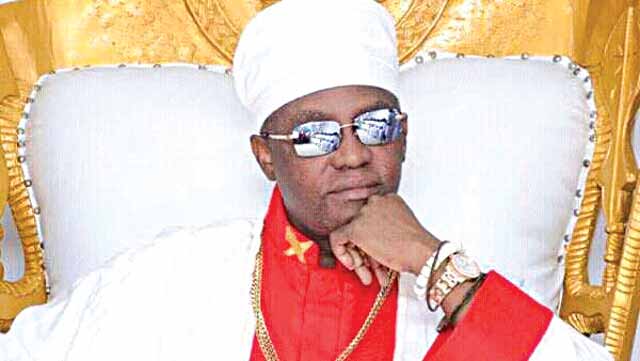 The monarch had brokered a peace meeting between the two main candidates before the election.

The Oba of Benin, Ewuare II, has congratulated Godwin Obaseki on his re-election as the governor of Edo State.

The Benin monarch also commended President Muhammadu Buhari and the National Peace Committee (NPC) chaired by Abdulsalami Abubakar, a former head of state, on the roles they played in ensuring a peaceful election.

He reiterated his position that the traditional institution remains non-partisan but would continue to ensure that the people are allowed to make their choice.

Frank Irabor, secretary of the Benin Traditional Council, in a statement on Tuesday, said the outcome of the election was the wishes of the people.

Following the rising spate of violence during the electioneering, the Oba of Benin had called the candidates of the All Progressives Congress and Peoples Democratic in the just-concluded election, Osagie-Ize-Iyamu, and Mr Obaseki respectively to a peace meeting on September 2, where he admonished them to ensure the peaceful conduct of the exercise.

As a follow up to the peace initiative, the NPC brought Mr Obaseki and Mr Ize-Iyamu to sign a peace accord before the election.

However, in a statement on Tuesday, Mr Irabor said, “As His Royal Majesty said on numerous occasions, the Benin throne is non-partisan that on the day of the election, let the people speak because the voice of the people is the voice of God.

“The Omo N’Oba N’Edo thanks His Excellency, Muhammadu Buhari GCFR, President and Commander-in-Chief of the Armed Forces of Nigeria, for ensuring that Edo State election was free, fair and violent free and also thanks to all the candidates of the political parties for adhering to the advice for a violent-free election given them during the peace meeting in the Oba’s palace on 2nd September 2020 which has been widely acclaimed to have doused the tension that was building up before the election.

“The National Peace Committee headed by Abdulasalmi Abubakar is appreciated for the signing of the peace accord among the gubernatorial candidates thereafter. Furthermore, Independent National Commission headed Professor Mahmood Yakubu is also commended for a successful and peaceful election in Edo State.”

The Benin monarch did not also fail to thank the security agencies for the role they played in ensuring that the election was violent-free.

Meanwhile, John Odigie-Oyegun, a former national chairman of the APC, has congratulated Mr Obaseki, on his re-election.

Mr Odigie-Oyegun, in a statement issued on Tuesday, said, “Please accept my deepest congratulations, Mr Governor on your re-election as Governor of our great Edo State. You and your exemplary Deputy have shown that with good work and principled leadership, the ills of overbearing and egocentric politicking in our nation can be overcome.

“Your very significant victory marks a watershed in Edo and indeed Nigerian politics and so places additional responsibilities on your shoulders. I wish you and your Deputy four more years of inspired and productive leadership of our people who have reposed so much confidence in you.”

BBNaija: Why I couldn’t control my feelings for Nengi – Ozo