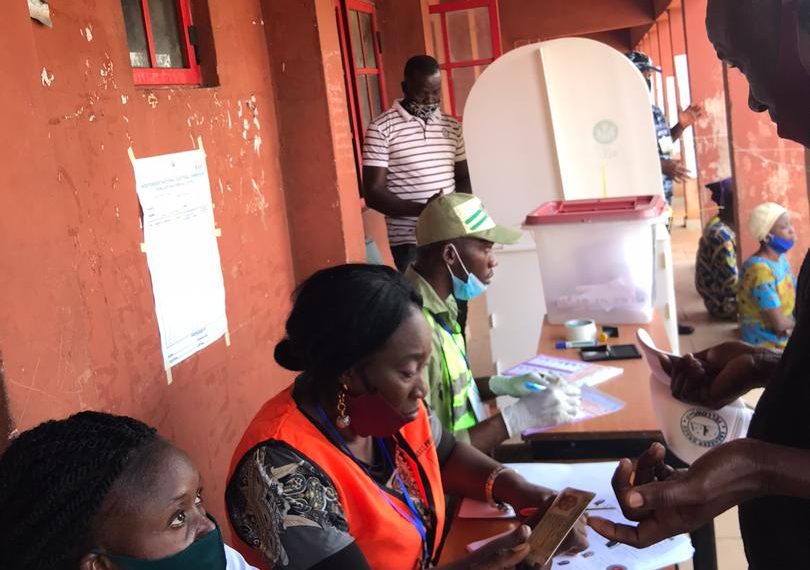 There were gunshots at Uneme-Nekhua, Ward 1, Unit 9 in Akoko-Edo Local Government Area of Edo State, the polling unit where Peter Akpatason, the Deputy Majority Leader of the House of Representatives cast his vote.

A visibly angry Mr Akpatason lambasted the security personnel for not showing up on time while the gunshots lasted.

PREMIUM TIMES learnt that trouble started when some suspected party thugs started throwing pebbles from the hilltop to the polling unit to create panic, but a group of armed local vigilantes retaliated with gunfire to chase the miscreants away.

It was not clear on whose orders the armed vigilante men were operating, but Mr Akpatason said he had to intervene to save the situation.

When a police detachment eventually arrived the scene, Mr Akpatason said, their delay almost resulted in self-help but he was able to calm his people down.

Mr Akpatason, who is a member of the All Progressives Congress (APC), said one of the thugs hauled pebbles at the voters with the intension of discouraging them and that the pebbles eventually shattered the windscreen of his car.

“Well, I think the first thing we need to look out, is the level of political consciousness in the place, the turnout. It is almost two and you can still see that people are still voting. We are a community that is highly politically conscious.

“It is not unusual that sometimes, people disagree but it becomes worrisome when it’s obvious that it is politically motivated with the view of discrediting, creating a ground for the cancellation of this genuine and legitimate results.

“This was predicted, there was a prediction, it is written all over the press that some people were planning to attack this voting centre. Right from last night, they have been hovering around everywhere, we kept vigil to make sure that the untold doesn’t happen but eventually, some miscreants decided to be unruly to the extent that a known person resulted to throw pebbles to disperse people who have come to vote so that they will not vote, believed that it was an intent to ensure that we don’t get maximum votes in this place or to cause chaos that could possibly lead to the discrediting the results.

“I thank God that my people are very mature, they have handled the whole thing with high sense of responsibility. But however, every act of crime, will surely be accounted for. As a result of that, I am going to go ahead to report the incident of one little boy who was trying to throw missiles at innocent voters to the extent of hitting my own car.

“In this community, we know that it is people that are behind them but we know that they are losers, and as losers, they will always do everything to scuttle the peaceful, the credible voting process that has always taken place, that was taken and is still taking place in this community,” he said.

The lawmaker, however, expressed optimism that the APC governorship candidate will emerge victorious at the polls.