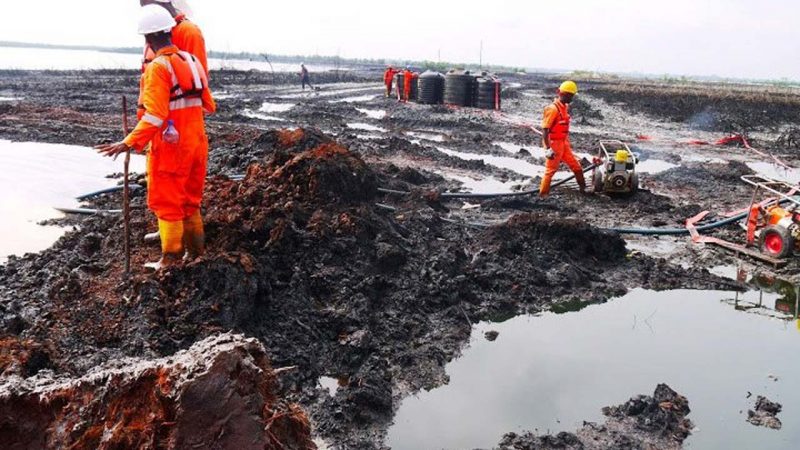 The lockdown occasioned by COVID-19 has caused a delay in the ongoing remediation project in Ogoniland, the Director General, National Oil Spill Detection Agency (NOSDRA), Idris Musa, had said.

Mr Musa, who disclosed this in an interview with News Agency of Nigeria (NAN) in Abuja on Thursday, added that land tussle in some communities was another reason for the delay.

He said the cleanup of Ogoni should not be seen as a political gimmick, assuring the people of the commitment of President Muhammadu Buhari’s commitment towards the remediation of the land.

‘’The 35 sites that were supposed to have begun were unable to begin because just about the time they were mobilising to site was when the lockdown started and in Rivers state movement is highly restricted.

“And the protocol of the COVID-19 will not allow such a thing. Even all over the world construction workers were asked to stay home.

“So that was what has really slowed down the tempo of activities in Ogoniland. But I can assure you that 56 contracts have been issued under the cleanup of Ogoniland, so they are now working hard to get it done.

“At least out of about $380 million that have been provided by the oil industry operators and out of this less than $50 million has been spent. So money is there, so if money is there where is the politics.

“If contracts have been given to contracts, so what is the politics. Two things are just responsible, COVID-19 lockdown on one hand and there were a few sites where there were delays in commencement because of community tussle.

“Hence, the tussle delayed those who are supposed to work in those particular areas. Those are just the thing happening there otherwise everything is moving.’’

Mr Musa said the communication group of the project coordination office on a daily basis embarked on sensitisation of the people in the communities, where there were land tussles and some cases had been resolved.

The D-G said there was a misconception as to how long the Ogoniland clean-up would take, adding that the clean up was for a five year period according to the United Nations Environmental Programme (UNEP) Report .

“The cleanup itself is expected to be for a period of five years, hence the release of funds on a yearly basis at the rate of $200 million per year will make up $1 billion at the beginning of the fifth year so it will complete the exercise.

“If you have cleaned up some of those mangrove areas that have been polluted and you put a seedling of mangrove, it will take up to 25 to 30 years before it can grow as tall as the one that withered.

“That is where a number of people misplace the argument. Some people will say UNEP said it will take 25 to 30 years to clean-up the region.

“No. It won’t take that but restoration to its re-existing state will take up to that. So, we need to always correct that assumption.“

NAN recalls that the Minister of Environment, Mohammad Abubakar, recently said while briefing state house correspondents that a total of 57 sites impacted with hydrocarbons were currently being cleaned up and more were being planned for remediation.