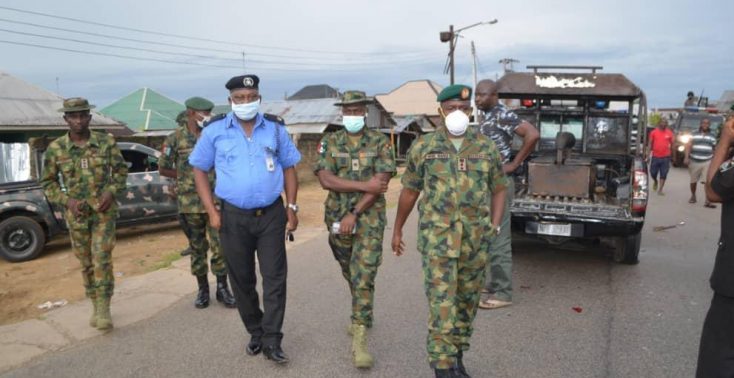 Nigerian Soldiers and other security operatives on routine inspection

The slain soldier, a lance corporal, was rushed to Our Lady Hospital, Bomadi, where he died from the assault, our sources said.

Those briefed on the matter told PREMIUM TIMES that the tragedy struck just after midnight on Thursday, after an altercation ensued between some policemen and soldiers, who were at a duty post at Setraco construction company, Bomadi.

Another soldier who reportedly witnessed the scene told military authorities that two patrol vehicles of Eaglenet Special Police Squad had approached the soldiers at their duty post.

Tempers flared when the policemen flashed torch light at the soldiers, asking them to identify themselves, military sources said.

They reportedly did, but an argument broke out, and one of the policemen opened fire on the deceased soldier.

Our sources said as other soldiers on sentry duty approached the scene, the policemen abandoned their vehicles and fled, leaving behind some identity and ATM cards.

PREMIUM TIMES has withheld the name of the deceased soldier to allow military authorities brief his family member about the incident.

Army spokesperson, Sagir Musa, did not return requests for comment on the attack and if any arrest has been made.

On her part, Ms Onovwakpoyeya also gave minimal information. She told PREMIUM TIMES “we are still investigating” and that there are no updates yet.

“Our heads have met to unravel the cause of the incident,” she said, adding that both the army and police are working hard to root out “crime and criminality” in the state.