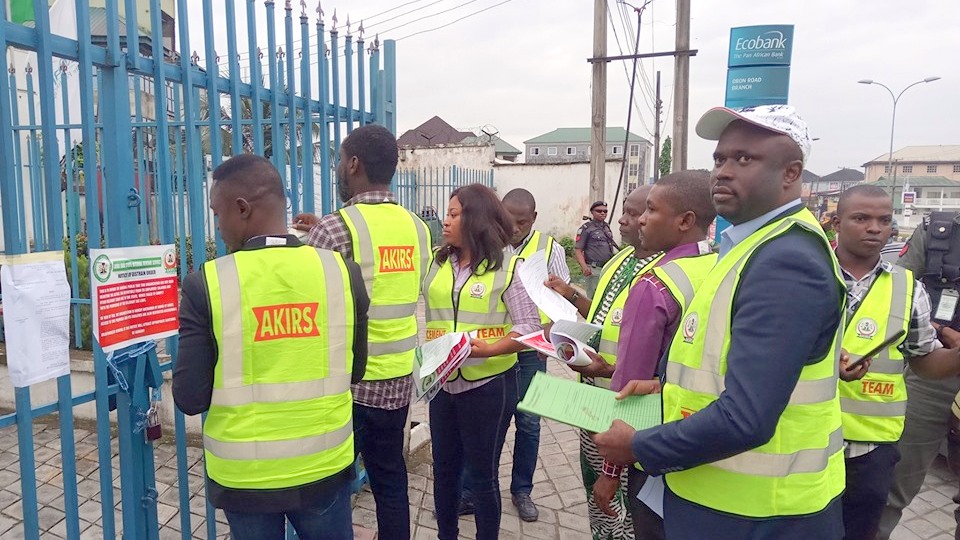 The Akwa Ibom State government has sealed the premises of Ecobank in Uyo over alleged tax default.

Tax officials, accompanied by some armed policemen, entered a branch of the bank along Oron Road around 8 a.m. on Friday and drove the staff out from the premises before locking its gates.

A few bank officials who were hanging outside the premises when a PREMIUM TIMES reporter visited at about 9:15 a.m., were seen apologising to customers and directing them to other branches of the bank in Uyo.

A notice put up by the Akwa Ibom State Internal Revenue Service at the locked entrance to the bank premises said, “This organization has not been remitting the actual tax deductible from its employees’ salaries and other relevant taxes due to the state. Hence, failed to comply with the provisions of the relevant tax laws”.

A court order authorising the sealing of the bank premises is also posted at the bank’s entrance.

The bank has allegedly defaulted in paying N301 million tax to the Akwa Ibom government, according to the court papers.

A customer care officer who stood by the roadside, to help direct customers to other branches of the bank, pointed to the court papers at the bank’s entrance when a PREMIUM TIMES reporter inquired about the case.

“That’s what they brought, I don’t even understand it,” she said, looking confused.

Ecobank has about three other branches in the city. They were still open for business as at 10 a.m.

It is, therefore, unclear if the government action is restricted to the Oron Road branch.

Tax officials have also sealed off a branch of the Union Bank at Abak Road, Uyo, PREMIUM TIMES learnt.

The Akwa Ibom state government of late has sealed off several business premises in the state over tax default.