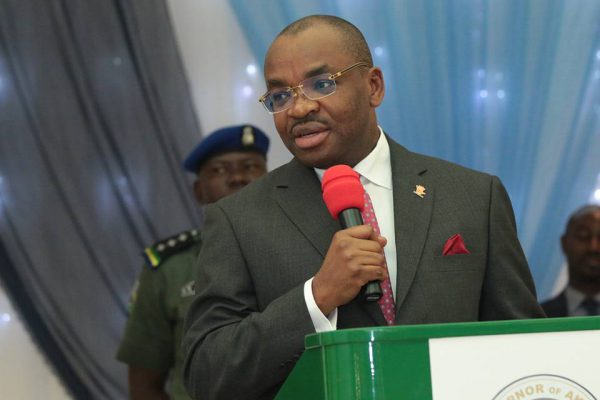 Governor Udom Emmanuel during the swearing-in of Dr. Emmanuel Ekuwem as the Secretary to the Akwa Ibom State Government, SSG.

Bassey Albert, a Peoples Democratic Party (PDP) senator from Akwa Ibom, has assured that senators and members of the House of Representatives from the state will not defect from the PDP.

Mr Albert, who has just won re-election for a second term, represents Akwa Ibom North-east in the Senate.

“With three senators and 10 House of Representatives members intact, we will not defect,” the senator told the state governor, Udom Emmanuel, during a meeting of PDP members in Akwa Ibom, Friday.

“We will work together to protect the interest of Akwa Ibom State in the National Assembly.”

Mr Albert is the only senator who stayed back in the PDP to contest for re-election, among the three who represent the state. Godswill Akpabio (Akwa Ibom North-West) and Nelson Effiong (Akwa Ibom South) defected from the PDP to the All Progressives Congress (APC) where they contested for re-election.

Both Mr Akpabio and Mr Effiong failed to win a second term.

Apart from Mr Albert, the two other PDP senators who will be representing Akwa Ibom in the 9th Senate are Chris Ekpenyong (Akwa Ibom North-West) and Akon Eyakenyi (Akwa Ibom South).

The PDP also won all the 10 federal constituencies in Akwa Ibom.

The PDP meeting, held at Government House, Uyo, had Governor Emmanuel and his wife, Martha, in attendance, including the deputy governor, Moses Ekpo, and the chairman of PDP in the state, Paul Ekpo.

Mr Albert told Mr Emmanuel that his re-election has restored the “dignity” of Akwa Ibom people.

“You are Nigeria’s most successful governor.

“You were elected governor for a purpose, and that purpose will be achieved by God’s grace. We assure you that, with the confidence reposed on us, we will not disappoint the state,” the senator said to the governor.

Governor Emmanuel in his remarks said the general election was won because Akwa Ibom people were united in their resolve.

“Today, by the grace of God, we can proudly say anywhere that we are Akwa Ibom persons and others will respect us,” the governor said.