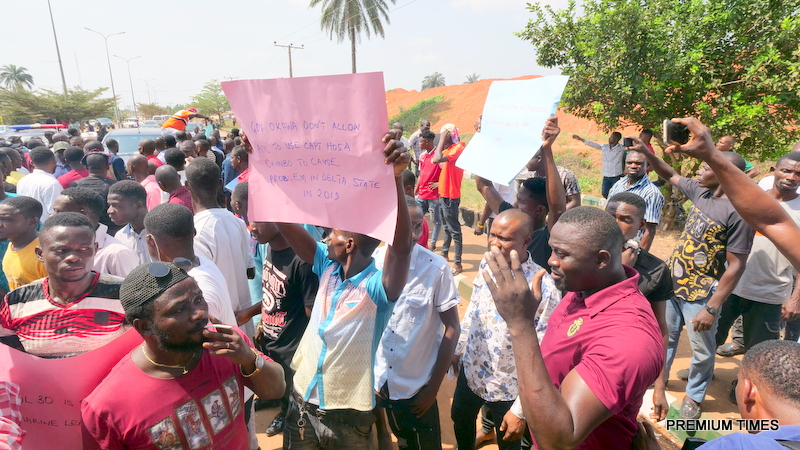 Youth from Ijaw, Isoko, Itsekiri and Urhobo ethnic nationalities of Delta State on Wednesday, blocked the gate of the Delta State government house protesting the alleged hijack of the Trans-Forcados Pipeline (TFP) oil surveillance contract by the management of Ocean Marine Solutions Limited.

The protesting youth, who trooped out in their hundreds, also alleged that the hijack was done in connivance with some ‘forces’ at the presidency.

Wednesday’s protest made it the second time angry youth and ex-agitators from 111 communities and hosts to Oil Mineral License (OML) 30 facilities are staging protest against the company in recent weeks.

PREMIUM TIMES gathered that activities at the Asaba Government House were temporary halted Wednesday as the protesters formed a human barricade that prevented vehicle movement for several hours while awaiting the arrival of Delta State governor, Ifeanyi Okowa.

Mr Okowa was at a Security Council meeting when the protest began, this newspaper learnt.

Lord Oriunu, who spoke on behalf of the protesters, accused the Group Managing Director of Nigeria National Petroleum Corporation (NNPC), Maikanti Baru, of allegedly conniving with Ocean Marine to hijack the surveillance contract for Trans-Forcados Pipeline.

He said the owner of Ocean Marine, Hosa Okunbor, had been awarded other surveillance contracts in the Niger Delta region which he claimed were not performing, adding that production had been seamless without any incident of oil theft while the surveillance contract for TFP was under the watch of locals.

The protest leader alleged that the Baru/Okunbor alliance is currently posing economic danger to Delta State, noting that discontent has started manifesting in the communities as well as division between traditional authorities and community leaderships.

He alleged that plans have been concluded to award the surveillance contract for TFP to Ocean Marine on Thursday (today) in Abuja despite their protests, adding that they will not hesitate to return to the creeks if the job is taken away from them.

“Sir, we have come to you as our father, leader and governor to complain about a clear threat to peace of our communities. We want you to intervene before things go out of hand,” he said.

“We humbly request you to use your good offices to appeal to President Muhammadu Buhari to cause an investigation into this unholy alliance between Baru and Okunbor.

“Why is the NNPC GMD piling multiple multi-million dollar contracts to someone that has shown incompetence in the contracts previously awarded to him? Why is he re-awarding a contract that has been excellently executed so far at a competitive rate to Okunbor at an over-inflated rate and why did the contract ignore due process and transparency?”

Protesters’ concerns to be addressed

In his response, Mr Okowa condemned any action which seeks to take surveillance jobs from locals, noting that he would look into the issue.

“Luckily this is happening on a day we are having our Security Council meeting. The security agents have been working hard with the support of our people and our youth, to keep the Trans-Forcados Pipeline safe and because of that, oil production has increased and oil revenue even to our state has increased,” he said.

“Beyond that, we all know that the Heritage Energy Operational Services Ltd and Shoreline Natural Resources Ltd, who are the operators of the OML 30 right from the beginning, met with us as a state government and that was at the directive of Mr President through the Chief of Staff.

“We sat here in Asaba with our leaders and our traditional rulers and we agreed to certain terms one of which is that the surveillance job will be hosted by people within Delta State and within the host communities.

“Thereafter, there was also a further meeting in Warri where the Secretary to the State Government (SSG) presided with all the 111 communities involved and we agreed that it is best to secure our pipelines by ourselves. You cannot come and watch people’s back yard for them since it is the people in a place who know how best to protect their property.”

“And if since June 2017 that the Trans Forcados line has been re-opened, it has been functional and oil production and export has increased, there has been no complain whatsoever, I will find it very disturbing if a new contract is being awarded not to talk of awarding it under much more higher cost.

“That will definitely be irresponsible and I believe Mr President will not support such. I also believe that the Nigerian nation realises as at today that we are still very much dependent in the proceeds from oil and if oil production has improved to the level that we have some level of comfort, I do not think that an action that would lead to the disruption of production and export should be welcomed.”

The governor said inflation of surveillance contracts, and any action that will lead to disruption of oil production – is economic sabotage, adding that the concerns of protesters will be addressed.

“We will therefore, immediately cause a letter that will include your petition to be written and delivered to Mr President, the Minister of State for Petroleum and the Chief of Staff.

“This is certainly not tolerable, anything that will be done to cause a reversal of the progress we have made should be seen as economic sabotage. Any action to re-award the surveillance contract and dismiss the locals is an act of economic sabotage.”

An official who answered the contact number listed on the website of the company promptly disconnected the call after being told the allegations levelled against the company by the protesting youth.