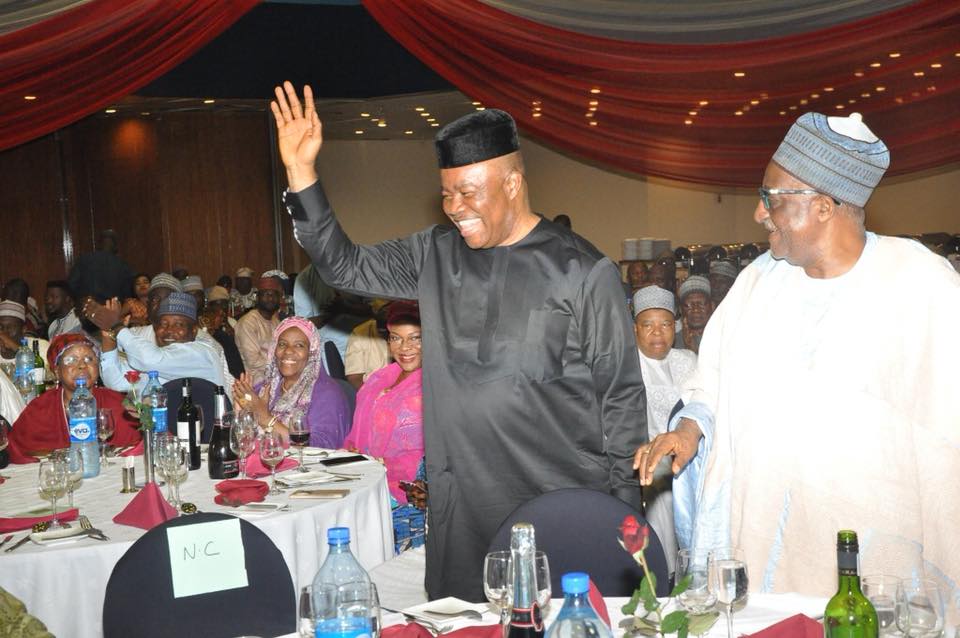 Three days after receiving APC defectors, Akpabio on way out of PDP

The Senate Minority Leader, Godswill Akpabio, was among the Peoples Democratic Party (PDP) leaders present at a dinner organised on August 1 in Abuja to welcome members of the All Progressives Congress (APC) who defected recently from the APC to the PDP.

Several APC senators, including the Senate President, Bukola Saraki, recently defected from the ruling APC to the opposition PDP.

Mr Akpabio posted on his Facebook page, photos of the dinner which took place at the Transcorp Hilton Hotel.

In the photos, the senator seemed to be in a joyous mood; he is seen laughing, hugging and shaking hands with other politicians. He was given some time to address the gathering.

Three days after the dinner, Mr Akpabio, ironically, is on his way out of the PDP. He has perfected his defection to the APC.

This was confirmed on Saturday by President Muhammadu Buhari’s Special Assistant on Prosecution, Okoi Obono-Obla.

Mr Obono-Obla, apart from confirming Mr Akpabio’s defection in a message he posted on Facebook, told PREMIUM TIMES, “Senator Akpabio is defecting to the APC, you can take that to the bank”.

Mr Obono-Obla described the senator as “a very ebullient” and “very charismatic” leader.

“I believe his coming to the APC will change the fortunes of the APC in Akwa Ibom in particular, and the South-South in general,” he said.

Going by Mr Enang’s tweet, the Ikot Ekpene rally will take place on Wednesday, and not on Thursday as earlier said by Mr Obono-Obla.

Although information has been making the rounds on it for more than one week now, Mr Akpabio’s defection has left many people, including the APC supporters especially in Akwa Ibom, in shock.

It is believed that the political differences between Mr Akpabio, who is a former governor of Akwa Ibom, and the incumbent governor, Udom Emmanuel, may be responsible for the senator’s defection.

Interestingly, the senator and the governor were dancing and jubilating together about 19 days ago when the people of Ikot Ekpene Senatorial District, which Mr Akpabio represents, organised a rally to endorse both of them for re-election.

Governor Emmanuel, on Saturday night, convened an emergency meeting of PDP leaders in the state, apparently to discuss the senator’s defection.

SPECIAL REPORT: From Marriage To Neglect: The anguish of Sokoto’s underage brides