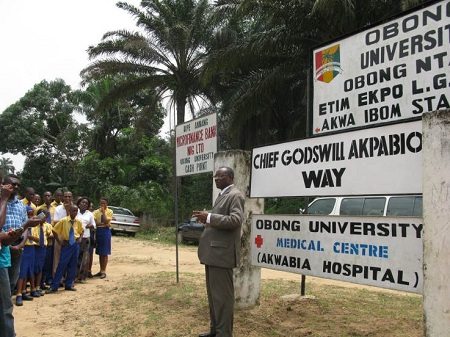 Three female students of Obong University in Etim Ekpo Local Government Area of Akwa Ibom State were abducted in the early hours of Friday from their hostel by armed men.

Police spokesperson in the state, Odiko MacDon, who confirmed the incident to PREMIUM TIMES, said one of the abducted students was however rescued immediately by the police.

Mr MacDon, a deputy superintendent of police, said the rescued student has gunshot wound on her shoulder and has been taken to the hospital for treatment.

“Police is on the trail of the abductors,” the police spokesperson said.

The students in the university embarked on a peaceful march within the campus in the morning to protest the abduction of their colleagues.

They were addressed by the Vice Chancellor, Udoudo Ekanemesang, who appealed to them to remain calm while the incident was being investigated.

The 18-year-old Obong University is one of the two private universities in Akwa Ibom State.

Etim Ekpo, where the university is located, is among the four local government areas mostly affected by cult-related killings and violence in the state.