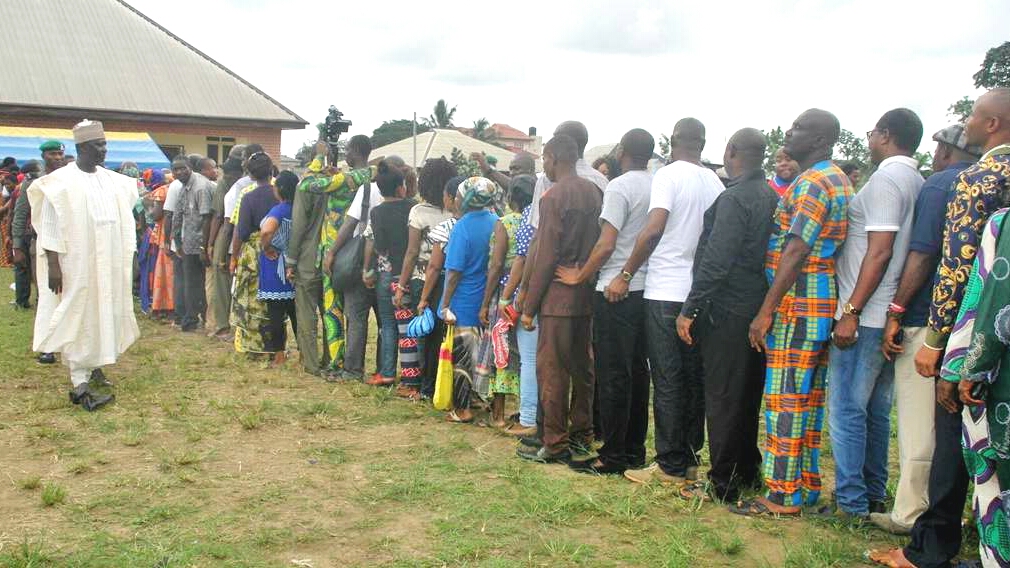 The nationwide state congresses of the All Progressives Congress (APC) are yet to start in the four South-South states of Edo, Akwa Ibom, Cross River and Rivers, reports the News Agency of Nigeria (NAN).

In Edo, accreditation had not started at about 10.28 a.m with heavy security at the Imaguero College, along Sapele road, venue of the congress.

A source at the party secretariat however told NAN that delegates and duly accredited media personnel would be conveyed to the venue of congress.

Similarly, national officials of the APC were yet to arrive the venue of the congress, but INEC officials deployed to observe the exercise arrived at about 11:30 a.m.

NAN observed that the more than 800 accredited delegates later arrived the venue in batches from Uruokpota hall, where they were accredited.

From Bayelsa, security had been beefed up at the APC secretariat in Yenagoa following the party state congress.
However, electoral materials were yet to arrive while accreditation of delegates started at about 11 a.m.

About 36 positions would be contested at the state congress.

The party’s state Organising Secretary, Tonye Okio, told NAN that about 3,000 delegates are expected to vote in the congress.

A report from Akwa Ibom says controversy had marred the APC state congress scheduled for Saturday at the party secretariat in Uyo.

According to Godwin Akwaowo, the APC Chapter Chairman in Eket Local Government Area, the state congress did not start due to the controversy.

He said: “They have not started the state congress yet because there is a lot of confusion in the party.

“Members of the party wants to embark on protest so that the rancour will be resolved once and for all.’’

However, he told NAN that the party was looking for a way forward on how to resolve the issues.

Consequently, the congress was yet to commence as at 11 a.m at the Sheergrace Event Centre, along Nsikak Eduok Avenue, venue of the exercise, which was empty but for some newsmen, security personnel and few other persons.

NAN also reports that party officials and INEC officials were also not present at the venue at about 11.15 a.m.
“I have been waiting here since 9 a.m and it seems the congress will start very late because nobody is forthcoming with any information from the party secretariat.

“I hope they will not keep us here waiting indefinitely throughout today,’’ a correspondent of the Federal Radio Corporation of Nigeria (FRCN), Ekemini Ubong.

Ita Enang, a leader of the party in the state, was yet to respond to inquiries from NAN about the conduct of the congress.

But NAN gathered that the APC stakeholders were consulting put finishing touches for the congress.

In Rivers, the APC rescheduled congress for Ward was expected to hold between 10 a.m and 1 p.m on Saturday, while the rescheduled Local Government congress was billed for Sunday from 2 p.m to 5 p.m with the State congress slated for Monday.

The state party leadership said it had opened its secretariat for issuance of nomination forms to intending contestants in the Ward congress as a result of the new dates.

Chris Finebone, Publicity Secretary of APC in Rivers, who confirmed this in a statement in Port Harcourt on Saturday, added that the forms would be issued based on presentation of the bank tellers.

He said that the development was in line with the cancellation of the Ward and Local Government Congresses and the rescheduling of same for Saturday and Sunday, May 19 and 20, respectively.

He said the rescheduling of the congresses was directed by the party’s national leadership.

“The Rivers chapter of APC wishes to emphasise, for the avoidance of doubt, that the state office was opened on Friday, May 18, for issuance of forms to intending contestants in the Ward Congress on presentation of bank tellers.

“It will remain open from 7 a.m on Saturday, May 19, for the aforementioned purpose,” he said.

Mr Finebone said that in exercise of its powers of discretion, the national leadership had also waived payment to bank for the rescheduled local government and state congresses because of the weekend.

He stated that intending contestants in the local government and state congresses could collect their forms after making cash payments to either the State Secretary or the Administrative Secretary’s offices at the party secretariat.

The spokesman advised all intending contestants and party faithful to take maximum advantage of the opportunity.
This followed the cancellation of the May 5 exercise by the national secretariat of the party.

Davies Ikanya, the state APC Chairman, told NAN on Saturday in Port Harcourt that the party had deployed officials to conduct the rescheduled congresses.

Mr Ikanya explained that the action was sequel to a letter signed by the National Chairman of APC, John Oyegun, and Secretary, Mai Bala Bunu, rescheduling the state congress for May 21.

He confirmed that the party secretariat was opened on May 18 to issue forms to intending contestants on presentation of bank tellers.

“After the APC national secretariat announced the cancellation of the ward and local government congresses conducted on May 5 and 12, respectively, we immediately started the process as directed by the APC.

“We opened the secretariat and started issuing forms to intending contestants as directed by party secretariat for the rescheduled ward congress,’’ the state chairman said.

According to Mr Ikanya, legal issues on the stoppage of congresses in Rivers are within the power of the APC national secretariat to address.

“I am not a lawyer to talk about court injunction but it is within the party’s national secretariat to handle.

“It is APC national secretariat that cancelled and rescheduled the ward and local government congresses, so, ours is to implement the directive,” he explained.

But Peter Odike, the state APC Deputy Chairman and supporter of Magnus Abe, in a statement said that the court order stopping congresses in the state was still subsisting.

Mr Odike urged his supporters to stay away from the congress.

NAN correspondents in Calabar reported of tight security at the Cultural Centre, Calabar, venue of the state APC congress.

Security men including the Army, DSS, Police and officials of the Nigeria Security and Civil Defence Corps were securing the venue and to prevent any breach of peace.

Accreditation of delegates, who crowded the entrance of the venue, for the congress scheduled to commence at 10 a.m was yet to commence.

Journalists were also barred temporarily from entering the venue of the congress to ensure accurate reportage of the exercise.