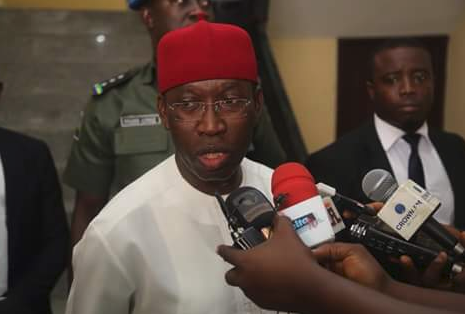 Mr Okowa, in a letter requesting the approval, said it would enable the state to contribute the 50 per cent required from it to access the 2017 SDGs fund from the federal government.

The governor said the approval would also enable the state to get a bank guarantee to secure the fund.

The approval of the request followed the adoption of a motion tabled by the Majority Leader, Tim Owhefere (PDP-Isoko North), during plenary in Asaba, the state capital.

Moving the motion, Mr Owhefere noted that the fund, when accessed, would ensure more development in the state, especially in the area of infrastructure.

The majority leader appealed to the members to approve the fund to enable to the make its counterpart contribution.

The motion which was unanimously adopted through a voice vote was seconded by Erhiatake Ibori-Suonu.

The house also passed a resolution, calling on the state government to direct the relevant agencies to urgently send relief materials to Emevor, Isoko North Local Government Area, which was recently ravaged by rainstorm.

The resolution followed a motion also moved by the majority leader.