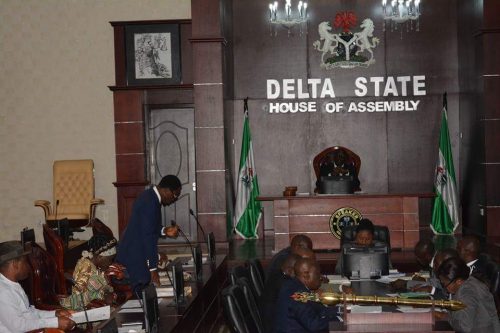 The Delta House of Assembly on Wednesday in Asaba suspended one of its members, Reuben Izeze of the Ughelli South Constituency, for allegedly misconducting himself.

The lawmaker’s suspension followed a motion moved by the Assembly’s Majority Leader, Tim Owhefere, during the legislative body’s plenary session.

Moving the motion, Mr. Owhefere noted that the behaviour of Mr. Izeze was unbecoming of a lawmaker, adding that such attitude would do the Assembly’s image no good.

He therefore moved that the lawmaker should be suspended for three months to enable him learn more about legislation.

The motion was seconded by the Chief Whip of the House, Pat Ajudua, representing Oshimili North Constituency.

It was then unanimously adopted by the Assembly after it was put through a voice vote by the Speaker, Sheriff Oborevwori.

“The member representing Ughelli South is hereby suspended for a period of three months for gross misconduct,’’ the Speaker ruled.

The News Agency of Nigeria (NAN) reports that the same lawmaker was also suspended by the Assembly in 2016 for alleged misconduct.

Meanwhile, the Assembly on Wednesday in another activity passed the Delta State Local Government Amendment Bill 2017.