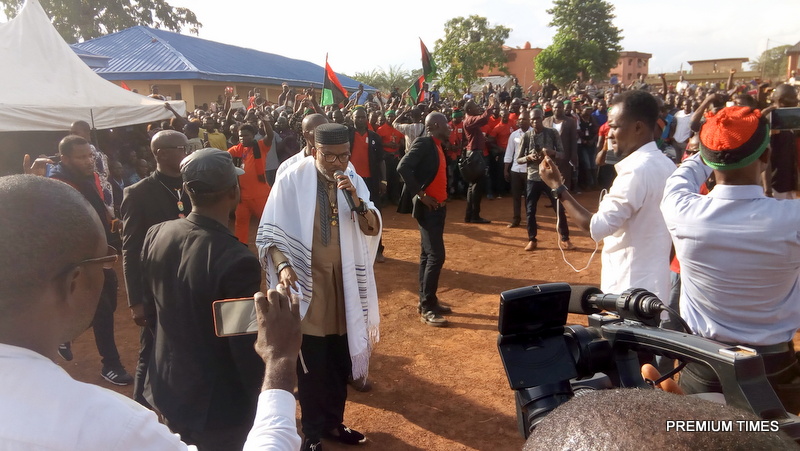 Why we set up Biafra Secret Service – IPOB

The Indigenous People of Biafra, IPOB, a separatist organisation, has revealed what necessitated the newly inaugurated Biafra Secret Service, BSS.

The online footage shows dozens of ‘officers’ all clad in black attire and red berets.

Mr. Kanu is seen walking around and in between them, inspecting what can be described as a guard of honour.

This has added a new layer to social tensions raised by separatist agitations emanating from the South-east region of the country.

In an attempt to douse tensions, the Publicity Secretary of IPOB, Emma Powerful, told The Sun Newspaper on Sunday that the secret service was not set up as a “standing army” but “a vigilante group to monitor and ensure the safety of its people returning from the North over the October 1 quit notice served on Igbo people in the North by a coalition of Arewa youth.”

“That’s why BSS was inaugurated to gather intelligence and to safeguard those returning home to Biafraland from the North,” Mr. Powerful said.

On whether the BSS will take up arms, he said, “IPOB can never be militarised because we are naturally peace-loving people. More importantly, we consider peaceful agitation to be far more potent than armed struggle, so IPOB will never resort to armed struggle.”

The Nigeria Police spokesperson, Jimoh Moshood, could not be reached on Monday to comment on the security angle.

He did not respond to calls and a text message to his phone. IPOB deputy leader, Uche Mefor, could not also be reached at press time.

At a press briefing in Umuahia, the state capital, Mr. Oyebade warned those behind the security network, which he described as “unlawful and illegal” to retrace their steps.

According to Mr. Oyebade the Nigerian constitution recognises only the Nigerian Police, Nigeria Army and the Department of State Service. He said that any other group claiming to be providing security without the backing of the constitution was illegal.

In the wake of his return, President Muhammadu Buhari has said the federal government is not going to tolerate separatist movements and inflammatory statements that threaten Nigeria unity and stability.

“Nigeria’s unity is settled and not negotiable,” Mr. Buhari said in a nationwide broadcast on Monday morning, two days after returning to the country from the United Kingdom.

Earlier, Vice President Yemi Osinbajo, who acted while the president was away, said, henceforth, hate speech would be treated as an act of terror, a statement that generated divergent views.