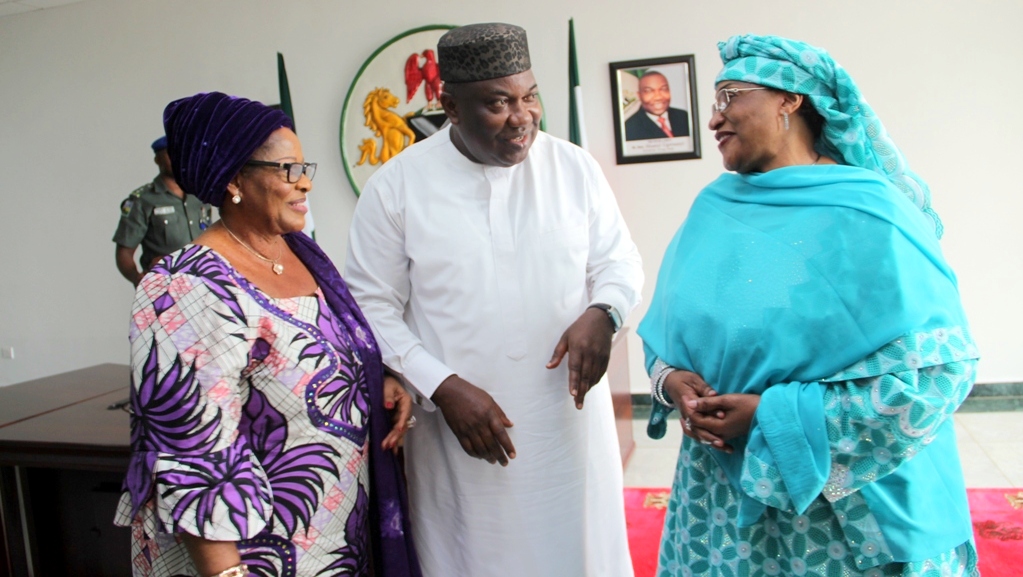 The Minister of Women Affairs and Social Development, Aisha Alhassan, has commended Governor Ifeanyi Ugwuanyi of Enugu State for his administration’s giant strides in uplifting the wellbeing of Nigerian women and children in the state.

Mrs. Alhassan, a former senator, also commended the governor for his contributions towards the passage of the Child Rights Law in Enugu State by the State Assembly, a legislation that protects the fundamental rights and welfare of every child in the state.

The minister spoke at Government House, Enugu, when she led a delegation of Nigerian women to pay a courtesy call on the governor to inform him of the federal government’s programmes which her ministry was organizing to interact and sensitize women in the state on government activities for them, their girls and children.

She expressed delight at the impressive performance of Governor Ugwuanyi in the state, noting that she was not surprised considering the governor’s pedigree and his passion for his people’s welfare when they were both in the National Assembly.

“I thank you, Your Excellency, because I have been hearing the good works you are doing in Enugu State. I am happy you have not disappointed me. May God give you wisdom, more strength and patience to continue to do what you are doing. When we were in the National Assembly, you were so passionate about helping your people and I am happy you have continued with that vision,” the minister said.

Responding, Governor Ugwuanyi, who welcomed the minister and her entourage, said the promotion and enforcement of programmes and laws concerning women and children remained one of the cardinal policy thrusts of his administration.

The governor added that Enugu had attained a reputation as “mother and child-friendly state having continued to earn plaudits for the Free Maternal and Child Health Care programme that we have been running successfully in the state”.

He said funds were currently being released to the Ministry of Gender Affairs “to mainstream children and women related programmes in budget implementation”, noting that the passage of the Child Rights Law further reinforced that commitment.

“We have in place a standing state committee on Child Adoption and Fostering whose duties among other things, is to facilitate the implementation of the Child Rights Law and to protect children from all forms of abuse including child trafficking while improving the quality of child justice administration and creating awareness and sensitization on adoption and related matters in Enugu State,” Mr. Ugwuanyi said.

“The State Government has continued to commit huge funds to upgrade and renovate infrastructure and provide facilities, furniture and essential equipment in primary and secondary schools in the state for the benefit of our children.

“The government has also taken steps to strengthen the relevant Boards and agencies in the management of primary and secondary education while institutionalizing a robust monitoring framework to supervise teachers and ensure more qualitative teaching practice for the proper intellectual development of our children.

“Despite the challenges inherent in its design, progress has been made in the implementation of the Home Grown School Feeding programme being carried out in partnership with the Federal Government.”

How I achieved 99 per cent support among senators – Saraki