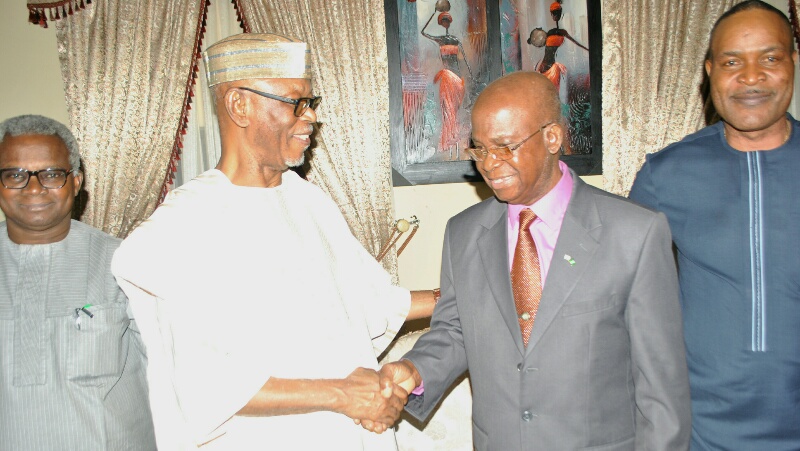 Why I dumped PDP for APC – Former Ebonyi Governor Elechi

The immediate-past governor of Ebonyi State, Martin Elechi, has listed reasons why he defected to the All Progressives Congress, APC, from the Peoples Democratic Party, PDP.

“The Party (PDP) got bedevilled by impunity, corruption, lack of respect for democracy, insensitivity to public opinion”, the former governor said on Thursday night when he led his loyalists and party executive from the state to the Abuja residence of the APC National Chairman, John Odigie-Oyegun, to formally inform the party’s National Chairman of his defection.

He said: “We think that the greatest joy in a democratic system is the right of people to choose who their leaders will be. That right to decide and determine our leadership has been destroyed in Ebonyi state under the PDP. And that was why a majority of PDP members protested and left that Party to look for a new democratic space.

“Our people have moved to the APC. I who swore that on leaving the PDP I will never join another party but I have now swallowed my pride to say I will sink or swim with the people I had laboured with. And that is why I joined the APC.”

The former Ebonyi State governor who registered for the APC at his country home in Echialike, Ikwo Local Government Area in April, also disclosed that the Minister of Science and Technology, Ogbonnaya Onu, amongst other APC leaders from the southeast zone encouraged him to join the APC.

While welcoming the former Ebony governor to the Party, Mr. Odigie-Oyegun expressed his commitment to ensure that the South-East adequately participate in the workings of the governing party and indeed the administration.

“I have that intense belief that every zone must and should participate effectively, particularly the South-East zone that constitute one of the tripod in this nation. You cannot have a healthy polity if any part of it feels that they are not in the mainstream. I have had the most wonderful few months receiving people from the South East who have made that wonderful and desirable u-turn to allow the Igbo race take their proper place in the scheme of things of this nation,” the APC National Chairman said.

Mr. Odigie-Oyegun said the APC will not repeat the culture of corruption and waste which was the trademark of past PDP administrations.

“Under the PDP, we became an economy that was totally built on corruption. State resources were diverted into private hands and pockets, the result of which the poor people of this country are feeling today… There is serious work to be done. At a time when oil was selling for over $120 per barrel, we neither built roads, railways nor did we maintain our airline, nor did we refine our crude to use, nothing. The institutions and commonwealth of this country was totally run aground. We spent billions of dollars on the energy sector and we got no energy. It is so painful. When you see the revelations today, you really feel that sense of anger.

“I am glad to receive you into the fold of the APC. The challenges are immense. There is serious work to be done. We are in the process of totally rebuilding this nation. We know the groans of our people, we know what they going through but given where we are taking off from, it became totally inevitable. As a party and government are doing everything to make sure the kind of corruption and waste witnessed in the past never happens in this country again. We have the boldness to investigate, to query people who have been in government and because we are hoping too that even if they are of the same party when we move away from office, they will look at our records. Unless we start doing that, we will never come out of that viscous cycle of everybody protecting everybody’s back and so corruption becomes an institution in its own.”

The Director-General, Voice of Nigeria, Osita Okechukwu while welcoming the former Ebonyi State governor, called for compromise among the party hierarchy and members in the south-east so as to strengthen the party and win elections in the zone.

At the meeting, the APC National Vice Chairman (South East), Emma Eneukwu, described the former Ebonyi governor as a “colossus in the politics of Igboland”.

He expressed confidence that with the admittance of the former governor and his many loyalists, the APC will take over the reins of Ebonyi State, come 2019.

Mr. Eneukwu hailed the APC National Chairman for his political will and drive to ensure that the south-east zone is mainstreamed in the governing party and indeed the current administration. He said the APC has evidently demonstrated its belief in internal democracy.

“In the south-east now, all former governors are in the APC. We are talking of grassroot governors that made great and positive impact on the political scenery of their state. I assure you that you will happy that you identified with our party.

“In the APC, we don’t write results during nomination. This is not a Party of favouritism. This is a party of due process and transparency. You will recall APC primaries conducted in Ondo, Edo were transparent and aired live across the country and that is why we are winning elections.”

The Ebonyi State APC Chairman, Ben Nwobasi, said the defection of the state former governor has caused a “political tsunami” in Ebonyi State for good and for the interest of the APC. He reported that the APC has recorded the highest number of registered members in the ward of the incumbent PDP governor of the state.

Dino Melaye: INEC yet to receive court order, to proceed with recall – Official