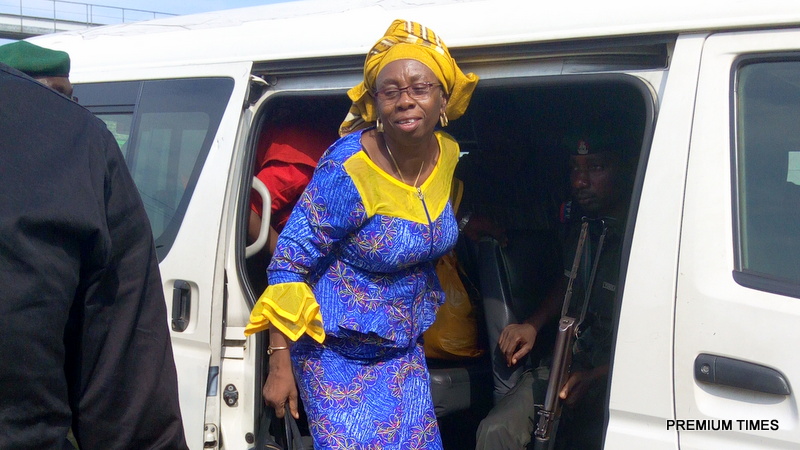 The Commissioner, together with one other official, Peter Popnen, was arraigned before Justice Salihu Saidu on a five-count charge bordering on gratification and money laundering to the tune of N185, 842,000 (One Hundred and Eighty Five Million, Eight Hundred and Forty Two Thousand Naira only). Specifically, the two former officials of the Independent National Electoral Commission, INEC, got into trouble for allegedly collecting the said sum in the weeks preceding the 2015 Presidential election as a bribe.

They are among the over 100 INEC officials that allegedly collected part of the $115million (N23bn), disbursed by a former Minister of Petroleum Resources, Diezani Alison-Madueke, during the countdown to the 2015 presidential election.

Count one of the charge reads: “That you Gesila Khan Okubama, Peter Popnen, Diezani Alison Madueke (Still at large) and others now at large on or about the 27th day March, 2015 within the jurisdiction of this Honourable Court did conspire among yourselves to directly take possession of the sum of N 185,842,000.00 (One Hundred and Eighty Five Million, Eight Hundred and Forty Two Thousand Naira only) cash which sum you reasonably ought to have known forms part of the proceeds of an unlawful act to wit: gratification and money laundering and thereby committed an offence contrary to Section 18 (a) of the Money laundering (Prohibition) Act 2012 as amended and punishable under Section 15 (3) of the same Act”.

The defendants pleaded not guilty to the charges when they were read to them.

In view of their pleas, prosecution counsel, O. Oyediran, asked the court for a trial date and pleaded that the defendants be remanded in prison custody.

However, counsel to the 1st defendant, S. Larry, told the court that he had filed a bail application for his client. He said the alleged offences were bailable and that the defendant had earlier been placed on administrative bail by the prosecution and urged the court to grant his prayers.

Mr. Oyediran, however, opposed his prayers. He said the application was served on him the previous day and he needed time to respond.

In his ruling, Justice Saidu turned down the 1st defendant’s application for bail and ordered that she should be remanded in EFCC’s custody pending the determination of her bail application. He, however, granted the 2nd defendant bail in the sum of N100 million and two sureties in like sum. The sureties must be resident within Port Harcourt. One of the sureties must have a landed property within the jurisdiction of the court, while the second must be a civil servant on the rank of a Deputy Director and above within the jurisdiction of the court.

The judge adjourned the matter to 9 June, 2017 for argument on bail applications and ordered the 2nd defendant to be remanded in prison custody pending the perfection of his bail.

Arewa group, which called for Igbo exit from Northern Nigeria, in another meeting