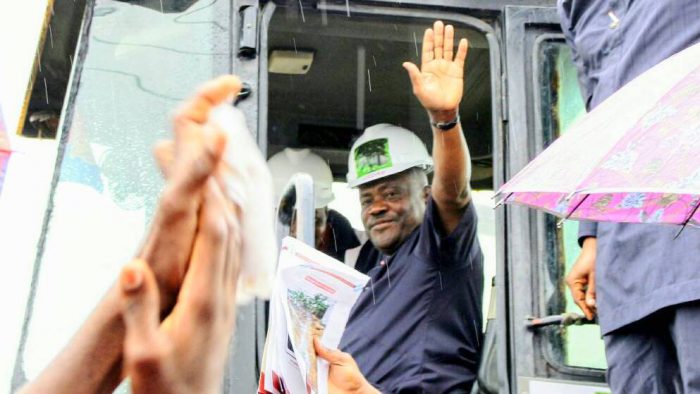 The Rivers State Governor, Nyesom Wike, has declared that after two years in office, the All Progressives Congress-led federal government has not executed any meaningful project in the state.

Flagging off the construction of the Elele-Alimini internal roads in Emohua Local Government Area on Tuesday, Mr. Wike said that the APC made promises and abandoned the state.

The flag of the construction of the Elele-Alimini internal roads is part of the second-year anniversary of Mr. Wike as governor.

“APC has deceived Nigerians. I challenge the APC to show one project that they have executed in Rivers State in the last two years.

“Enough is enough for the lying and deception of the APC. You can see the difference between light and darkness,” he said.

The governor explained that construction of the Elele-Alimini internal roads is in fulfilment of his promise to the people of the area.

He said that the people of Rivers State have no business being in the APC as the party has shown by its actions that it will not execute projects in the state.

He commended a leader of the APC in Elele-Alimini, Chibuike Dike, for leading his supporters back to the Peoples Democratic Party, PDP.

In his remarks, a former President-General of Ogbakor Ikwerre, Augustine Ahiazu, said the Ikwerre Ethnic Nationality is proud of the achievements of Mr. Wike.

The Rivers State Works Commissioner, Iheanyichuwu Bathuel, said that 20 roads, spanning 30 kilometres will be reconstructed in Elele-Alimini to assist them move their farm produce to markets.

After paying about N6 billion to contractors, Nigerian govt to terminate abandoned projects