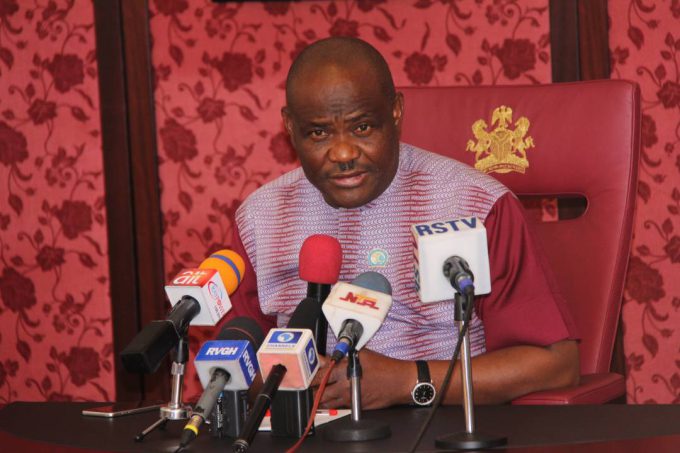 Rivers State Governor, Nyesom Wike,  has insisted that the Inspector-General of Police, Ibrahim Idris,  plans to kill or silence him politically because of the political directives that the police chief has received.

He further declared that Mr. Idris has concluded plans to plant guns and other incriminating  items  at his Asokoro  Extension Residence in Abuja.

Addressing  journalists at the Government House, Port Harcourt on Saturday, Governor Wike said the Inspector-General of Police on Friday approved the raid of his Abuja residence.

He said: “All attempt  is being made so that they will  go and plant either AK47 or one million dollars in  the governor’s  house. They can even plant costly wrist watches as a propaganda  tool.

“I said I have  to let Nigerians  know that this is not the way to go about in democracy. Rather, this is an attempt to truncate democracy.  That someone  differs on issues does not mean you have to go after the person’s life.”

Governor Wike  said this is the latest in the series of planned propaganda  by the police to sow devilish information  against  him.

He said because of the unconstitutional nature of the raid, the police refused to indicate that the house to be raided belongs to the Rivers State Governor.

“Nigerians  should be aware that should  they raid my house in Abuja and claim they found anything, it is incorrect.  I have not been going to Abuja, but I will be in Abuja  to wait for them to see how they plan to plant guns in my house,” Governor Wike said.

While maintaining  his position  that the Inspector-General of Police is after his life, Governor Wike stated that this recent plot is aimed at silencing him because the Rivers State Government claimed the Ikoyi Billions was reportedly  left there by the former Rivers State Governor.

He decried  the pattern that has been adopted in the nation’s  democracy, saying it would negatively  affect  the growth  of  democracy.

“Our democracy  cannot survive if we continue with  this line of action.  If the Inspector-General of Police  wants to play partisan politics, let him remove  his uniform and join us in the arena. He should  not continue to wear uniform and do the bidding of politicians like a stooge,” he said.

The governor  added: “I want to reiterate, the Inspector-General of Police  is after my life”.

He said security  agencies  have adopted the unwholesome  method  of  planting guns and cash when the owners of the houses are not at home, simply for political  reasons.  He cited the case of Former Benue State Governor, Gabriel  Suswam  and Senator Danjuma Goje.

On the Ikoyi Billions, Governor Wike  said Rivers State lawyers were working on the matter, stating that the money belongs to the Rivers State Government.