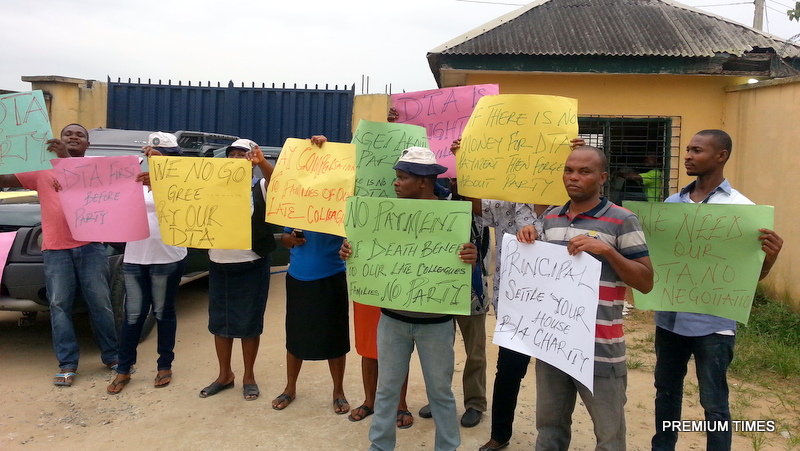 The non-teaching staff of the Federal Science and Technical College, Uyo, Akwa Ibom State, held a peaceful protest, on Friday, against the principal of the girl’s school, Pauline Etoamaihe.

The protesting workers, who assembled as early as 7a.m in front of the school gate, used an SUV to barricade the gate. A handful of the workers, holding placards, stood in front of the gate, singing solidarity songs.

The workers accused the school principal of insensitivity and highhandedness in her dealings with them. They said for about two years now, the principal was yet to pay Duty Tour Allowance (DTA) to about 100 workers, from different cadres, who attended promotion interviews.

The protest disrupted plans by the principal to organize a send-forth party for retiring workers in the school.

There was a police pick-up truck parked close to the school gate, with four armed police officers inside.

PREMIUM TIMES gathered that lectures were going on peacefully inside the school, even though the protesters blocked non-teaching staff and visitors from entering the school.

Some of the school workers who didn’t take part in the protest, stood under a mango tree, across the road, to watch what was going on.

Iboro Umoren, a worker in the college and a leader in the Nigeria Civil Service Union, addressed journalists on behalf of the protesters. Mr. Umoren said they decided to disrupt the send-forth party in order to draw the principal’s attention to the plights of workers.

Mr. Umoren made reference to President Muhammadu Buhari’s directive, which barred federal ministries and institutions from buying souvenirs and gifts because of the economic recession in the country.

It would have been better for the principal to use the money to pay the DTA or even pay the death benefits to four staffers who lost their lives this year, Mr. Umoren said.

“The DTA ranges from N60, 000 to N70, 000, depending on the worker’s level, while the least gift item she bought is N150, 000,” said Mr. Umoren, who alleged that the principal bought television sets, refrigerators, washing machines, and power generating sets as gifts for the retirees.

“Because of the party she wants to organize, we want to believe that funds are now available in which the principal could pay the DTA, but she has refused,” he said.

The principal, Ms Etoamaihe, told PREMIUM TIMES that the protesting workers were being unreasonable in their demand. She said money meant for payment of DTA comes in small bits, and therefore workers could only be paid in batches. “I have not even received mine,” she said.

Ms. Etoamaihe said the botched send-forth party was planned for “more than 10 workers”, as part of the welfare package. She said since the civil service has codes, there was no way she could use money meant for welfare, to pay for the DTA.

Besides, she said she used her personal money for the send-forth, with the hope that she would get it back when funds come in.

She said that some of the gifts she bought for the retirees cost between N3, 000 and N5, 000. She however refused to say what kind of gifts they were.

“That one is none of your business. I can decide to give anybody what I want, it’s my own headache,” she said.

A similar tension had rocked the college in September, at the beginning of the new school year, when the principal and the parents clashed over allegation of extortion.

About four armed policemen were seen walking round the school premises on the resumption day.

The parents who spoke with PREMIUM TIMES said that the principal wanted to use the policemen to prevent them from dropping their wards in school because of their refusal to pay the ‘insurance fees’.

“We have never seen armed policemen brought into this school, this is the first time,” said Emmanuel Udo, the Chairman of the Parent-Teacher Association (PTA).

“We in the PTA are peace-loving people. We are not here to make any trouble.

“The director of Basic Education in the Federal Ministry of Education appeared on a national television and said that insurance was optional for the students.

“It is optional for me to insure my child. The school cannot force me or any parent to pay insurance,” Mr. Udo said.

Mr. Udo had directed parents who refused to pay the ‘insurance fees’ to drop their wards in the school compound, whether the school authorities accepted to check them into the hostel or not.

Ms. Etoamaihe told PREMIUM TIMES that she called in the police based on “government instruction that we should call in the police whenever anything happen in school”.

She couldn’t explained what the ‘insurance fees’ was all about.

“I don’t know what it is (all about). I am under authority. It was passed down to me, and I passed it down to them (the parents).

“If they (the parents) have a problem (with the insurance fees) they know who to go to, and not me,” she said.

For the mackintosh bed cover, the principal said that the African Development Bank (ADB) which donated the mattresses to the school insisted that it was mandatory for any student using the mattress to cover it with the bed cover, so that it could last longer.

Nseabasi Etukabasi, who has a daughter in the school, told PREMIUM TIMES that most of the parents were disappointed with the management of the school.

“The management of the school has lost its integrity,” said Mr. Etukabasi, who teaches in the University of Uyo, Akwa Ibom State.

“Multiple fees are charged. Even when materials or services have not been delivered, they still extort money from parents.

“We don’t know which insurance is involved here. We don’t know the terms of the insurance they are talking about, all they are interested in is to collect money,” he said.