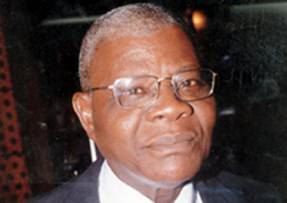 The late Justice Niki Tobi was a solid defender of human rights and the rule of law, according to human rights lawyer, Femi Falana.

Mr. Falana described the late judge as one of the finest minds to have been on the Supreme Court.

“He had become a professor of law before he was elevated to the high court bench,” said Mr. Falana, a Senior Advocate of Nigeria.

“His intellectual background added value to the several verdicts of the Court of Appeal and the Supreme Court. Notwithstanding the complexity of a case he was always quick to appreciate and identify the issues for determination. Justice Tobi’s language was colourful and flowery.

“In Mojekwu v. Mojekwu, Justice Tobi invoked the CEDAW to uphold the equality of women and men. In Mrs. Mary Okonkwo v. ACB the late jurist held that it was illegal and unconstitutional to arrest and detain a mother in lieu of her son…

“However his lordship went too far in sticking to rules of procedure and legal technicalities. For instance, in Madike v The State, the Court of Appeal admitted the appellant to post conviction bail but Justice Tobi demurred and wrote a minority judgment wherein he upheld the continued detention of the appellant under decree 2 of 1984 .In his leading judgment in the case of Buhari v Yaradua, Justice Tobi upheld the validity of the 2007 presidential election on the ground of substantial compliance even though the ballot papers used for the election were not serialized.

“Notwithstanding some of his controversial judgments, the Nigerian judiciary will certainly miss the erudite Justice Niki Tobi who was a consistent defender of rule of law even under a military dictatorship that ruled with absolute powers.”

Also, Governor Ifeanyi Okowa of Delta State said Mr. Tobi’s death was not only shocking but painful given his pedigree, capacity and contributions to the development of the law profession in Nigeria.

In a statement by his Chief Press Secretary, Charles Aniagwu, Mr. Okowa said: “Justice Nikki Tobi was a man of many parts who excelled wherever he found himself leaving behind trails of credibility and integrity. I am shocked and pained by this death. A man of humility, credibility and high integrity has passed on.”

Governor Okowa noted that late Justice Tobi was a pride to the Ijaw nation and Delta State, saying he made the country proud through his contributions to the development of law practice in Nigeria.

“Justice Tobi excelled in two difficult worlds. He was excellent in the academic world as a lecturer and became a reference point in the legal world.

“On behalf of the government and people of Delta State, I commiserate with the Niki Tobi family, the Ijaw nation and Nigerians on the demise of the erudite teacher and jurist Justice Niki Tobi.”