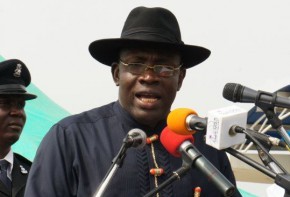 The governor of Bayelsa State, Seriake Dickson, has dismissed the plot by the All Progressives Congress to win the 2016 governorship election in the state, saying the party will wait till eternity to actualize its dream.

He also said he inherited a whopping debt of N332.2 billion when he assumed office in 2012 and rejected the claim by the opposition party that the state has nothing to show for the federal allocations to it.

This is contained in a statement on Monday by the governor’s media aide, Daniel Iworiso-Markson.

The National Chairman of the APC, John Oyegun, lambasted the state government for poor performance, saying it could not account for the huge allocation from the federal government.

Mr. Oyegun spoke through the National Vice Chairman of the party, Hilliard Etaho, while receiving former Chief of Staff in Government House, Diekivie Ikiogha, into the party at a ceremony in Yenagoa, the state capital.

Mr. Dickson said if the APC is expecting the defectors it is now welcoming with open arms to win the governorship election in the state, it would have to wait till eternity, stressing that Bayelsans have no time for political miscreants.

He added, “Through prudent management and commitment to the ethos of good governance, that debt today stands at N90 billion. Out of the N440 billion that his government received as allocation from the Federation Account about N242 billion was used to help pay down that debt even as it embarked on an unprecedented level of infrastructural development and socio-economic welfare schemes.

“This is why the Bayelsa state government considers as very uncharitable the statement attributed to APC Chairman Chief John Odigie-Oyegun that the government has nothing to show for that allocation from the centre.

“The APC chairman’s posture is highly curious given that he had warned against defections to his party after its victory at the March presidential elections, advising potential defectors to remain in their existing parties and help build a virile opposition in the interest of the development of the nation’s democracy. So why is the APC now welcoming the sudden influx of power prostitutes and fair weather politicians who spin cock and bull stories into its fold?”

Mr. Dickson said the defectors are no loss to the PDP in the state and that the APC richly deserves what it gets by welcoming and accommodating elements steeped in treachery into its ranks.

“But Chief Oyegun should kindly leave the Bayelsa State government out of its (his party’s) growing confusion,” he said.

“The state government is preoccupied with changing the lives of Bayelsans for good as is already evident in its transparent administration, commitment to good governance, landmark infrastructural development, empowerment of the people, free compulsory qualitative education, social welfare payments to the elderly and unprecedented health infrastructure.”