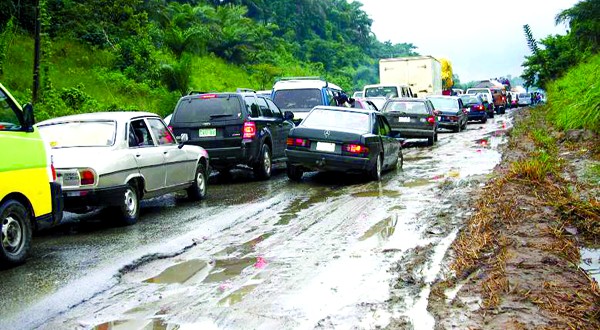 Akwa Ibom Government has appealed to the Federal Government for immediate intervention to arrest erosion threatening to cut off Calabar-Itu Highway at Enen Atai village in Itu Council Area.

The state governor, Udom Emmanuel, made the appeal on Tuesday when he visited the collapsed portion of the federal road leading to Calabar in Cross River.

The highway constructed by the military administration in the 70s is at the brink of total collapse due to erosion threatening the road on both sides.

The News Agency of Nigeria (NAN) reports that heavy trucks ply the road daily to convey quarries excavated from Akamkpa in Cross River.

Mr. Emmanuel was conducted round the collapsed portion of the road by the State Ministry of Work’s Permanent Secretary, Ifreke Ekpa.

The governor noted that the threat was a serious challenge to vehicular movement between Akwa Ibom and Cross River.

He urged the Federal Government to extend a hand of fellowship by entering into Public-Private Partnership (PPP) modality to construct and maintain the road regularly.

Mr. Emmanuel said that Calabar- Itu Highway was critical to the economic activities of the South-South Region.
“This is the busiest road in this part of the region witnessing heavy commercial activities.

“This is a federal road, the resources of Akwa Ibom Government cannot afford the construction of the road, Federal Government has to do something urgently,” Mr. Emmanuel said.

The Permanent Secretary said that the landslide was 25 metres from the median of the road.

Briefing the governor, the Chief Technical Officer, Federal Ministry of Works, Uyo, Christopher Ita, said he had sent proposal on the menace to the headquarters in Abuja for action.

Earlier, the Village Head of Enen Atai, Effanga Usua noted that the menace of erosion on the road was a serious threat to the economic activities of the citizens.

Chief Usua, a retired Professor of Biological Science, described the governor’s visit to the scene of the collapsed road as sign of good leadership.

He advised the government to go into action immediately to prevent total collapse of the road. (NAN)