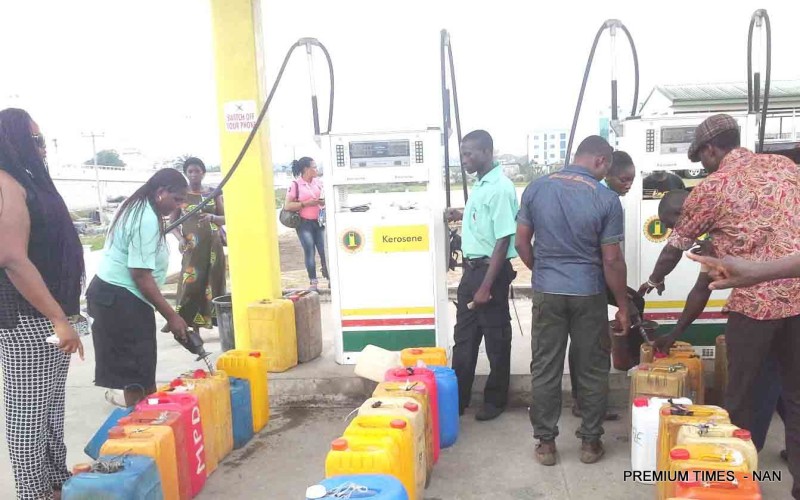 Several political support groups within the Peoples Democratic Party [PDP] in Bayelsa, including the Women for Change Initiative, promoted by the first lady, Patience Jonathan, on Thursday hijacked the Kero Correct Initiative of the Nigerian National Petroleum Corporation, NNPC, as an electioneering tool aimed at garnering support for President Goodluck Jonathan.

They also declared that the kerosene was from Mr. Jonathan and the Petroleum Minister, Diezani Alison-Madueke.
A special line was created for PDP leaders at various levels as well as Women for Change Initiative, which sent a retinue of officials to oversee the kerosene sales at N50 to lure the poor.

The pump attendants dispensed 25 litres to each beneficiary whilst the crowd surged and occupied every available space at the filling station.

However, police officers deployed to ensure order were seen helping themselves to several jerry cans of kerosene while thousands remained under the scorching sun for hours on end without a drop of the elusive cheap kerosene.

Some elderly women in their 70s lamented that they had been under the sun for hours without getting the product.

“This is sheer deception,” Jemimah Ekio said. “I was told that kerosene was available but with this crowd, there is no way I can have the strength to wait for it. The suffering is too much. If I knew that it would be like this, I would not have bothered coming out. I have been under the sun for hours and did not buy. I am tired.”