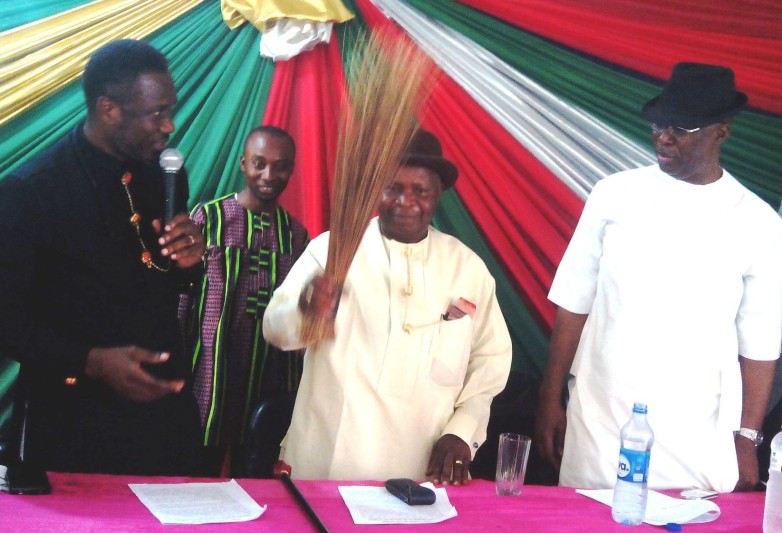 The All Progressives Congress, APC, in Bayelsa on Friday received Fred Oboro, a chieftain of the state’s Peoples Democratic Party [PDP] into its fold.

Mr. Oboro, a former senator, was received by the state chairman of the APC, Timipa Orunimighe, as well as other party executives, including three senatorial candidates of the party in the forthcoming elections.

Speaking at a press conference to announce his defection, Mr. Oboro, who claimed to be a founding member of the PDP in Bayelsa, criticized his estranged party for lacking internal democracy.

He said President Goodluck Jonathan owed the state an apology for neglecting his home state during his six years as president of Nigeria.

“In 1998, we laid the foundation for PDP and nurtured the party to become the dominant party that it has become in the state, but the outcome of the recent PDP congress has destroyed the cohesion in the party,” Mr. Oboro said.

“The people of Bayelsa have been yearning for development, and we pledge that the APC presidential candidate (Muhammadu Buhari) would reverse the trend.”

Mr. Oboro noted that the state fared better under the presidents from the north. He noted that Bayelsa was created by former Head of State, Sani Abacha, while the amnesty programme currently enjoyed by the youths of the state was the handiwork of late President, Musa Yar’adua.

He alleged that the Ijaw nation had not benefitted from Mr. Jonathan’s presidency and said those campaigning for the president in the forthcoming elections were doing so based on mere sentiments.

Speaking at the occasion, Timipre Sylva, a former governor of the state and a senatorial candidate of the APC in the coming polls, noted that Mr. Oboro, who was a pillar in the PDP, would be an asset to the APC.

He noted that insecurity, widespread poverty and epileptic power supply would be addressed if APC was elected in the coming elections.

He said the APC would soon receive more credible politicians who have indicated interest in joining the party.

He said Bayelsa needed the rest of Nigerian society with its diversity to optimally exploit its abundant natural resources for the benefit of its people.

Welcoming Mr. Oboro to the party’s fold, state chairman of the APC, Mr. Orunimighe, noted that the former PDP chieftain was an asset to the party and urged him to join forces to enhance the fortunes of the party in the polls.

Why Falalu Dorayi is one of most sought-after Kannywood directors

God is my godfather – El-Rufai