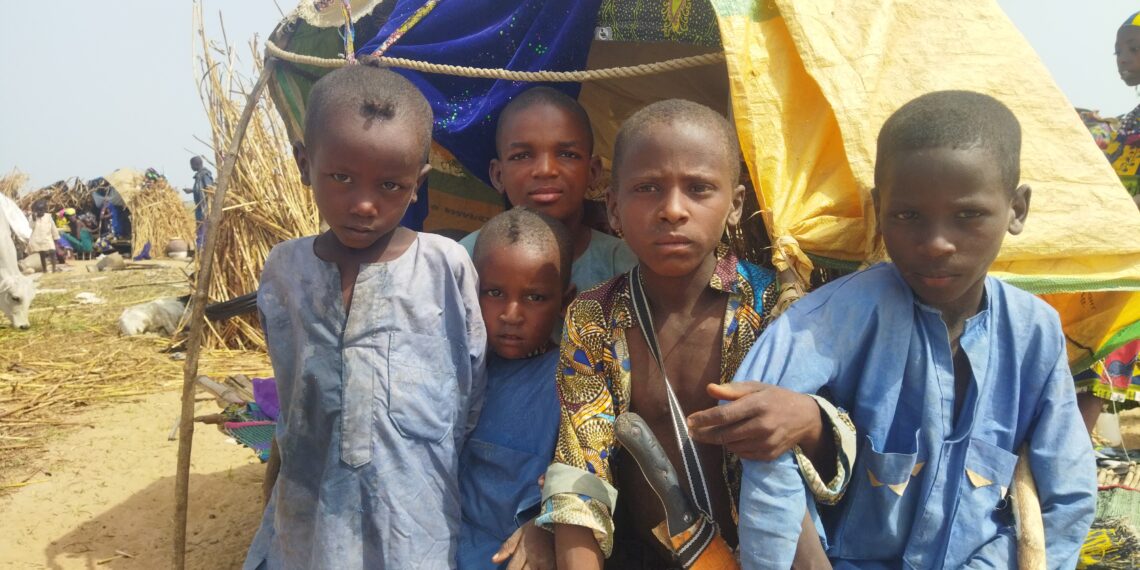 Children birthed at the IDP camps are yet to be immunized against diseases.

At the Kadira Internally Displaced Persons’ camp in the heart of Jigawa, little children moved around in groups, unperturbed by the presence of strangers within the camp. Some of them looked forlorn and tired, in expectation of a return to normal life outside of the IDP camp. Khadija Malam, a primary one pupil of Kadira primary school, told PREMIUM TIMES that she is eager to return to school once the flood subsides.

Located about fifteen kilometres away from Guri town, the local council headquarters, the cam is hosting some of the residents displaced by floods in Jigawa, including their children, whose academic lives have now been disrupted.

“I have been here since the flooding started, our house has damaged, and my father took us here,” Khadija said. “I don’t know whether school has resumed but I will (like to) go back to school.”

Muhammadu Bashiri, a primary 3 pupil at the Kadira primary school, said he remains uncertain about his education in the aftermath of the flood but he is eager to return to school.

At the neighbouring Kirikassamma local government area, the education secretary, Bulama Marma, said 22 basic schools were damaged by the flooding, out of which 17 are nomadic schools.

At the IDP camp in Baturiya, many of the nomadic school children can be seen wandering around, rearing animals. One of the pupils, Buba Nyako, told our reporter that he doesn’t know whether he would return to school after the flood recedes.

But Buba’s father, Mr Nyako, said the children will return to school if they return to their settlements once the floods subside.

The flood incidents recorded across Nigeria left a trail of destruction on rural healthcare facilities and schools in Jigawa State between August and October. These impacted maternal healthcare and kept many children out of school.

Across villages in Kirikassamma and Guri Local Government Areas, the floods affected hundreds of school children, with at least 47 basic schools in the areas submerged by waters. Since torrential rain began in August, floods have displaced thousands of people and killed over 100 across the state, according to official figures. Many families have also lost their homes, livestock, and farmlands while critical infrastructures such as dams and bridges have been washed away across the state.

Although the Jigawa State Government announced the resumption of schools statewide in the first week of October, pupils and teachers in Guri and Kirikassamma could not resume because of damaged classrooms and submerged roads. Pupils who had to move rivers using boats were shut out of school due to the high cost of water transportation, worsened by a poor harvest.

The Guri Local Government Education Secretary, Kaka Alhassan, said 25 basic-level schools were affected by the flood, out of which 22 are nomadic schools across the local council area.

Umar Gafta, a teacher at Famdun Fulani Nomadic School, said of the over 80 pupils of the schools, only three pupils were receiving lessons as of the last week of October. The three pupils are lucky enough to be in school, he said, because they are taking refuge at the nomadic school building.

The teacher said the nomadic school at the Famdun Fulani settlement is also serving as an IDP camp being occupied by displaced families of herders around the community. One of the leaders of the herders, Wakili Jatau, told our reporter that he hopes to return home if the floods subsided to give space for the pupils, who are mostly his grandchildren, to return to their classes.

The United Nations Educational, Scientific and Cultural Organisation (UNESCO) in its latest global data, said Nigeria now has about 20 million out-of-school children. The current flooding challenge must have negatively impacted children’s education in Jigawa, which is a part of Nigeria’s North-west that is already battling a high number of out-of-school children.

The Senior Education Manager of UNICEF, Michael Banda, noted that in Jigawa State, there are missed opportunities for learning as 27 schools are flooded, while as many as 18 schools are being used as IDP camps. In a recent assessment by UNICEF, the official said only 25 IDP camps and two communities were covered.

The official said the in-depth multi-sectoral assessment, conducted in collaboration with the Jigawa State Government’s team representing various sectors, and the World Health Organisation (WHO), showed that children and women have been most hit by the flood.

Mr Banda said children affected by the flood stand the risk of exposure to violence, sexual abuse, neglect, and exploitation. There is also an evident lack of access to correct information on disease prevention and rights protection, it said.

Primarily because of the absence of latrine and WASH facilities, the affected population is highly prone to cholera and other water-borne diseases, the official said, adding that loss of loved ones and property may lead to life-long emotional distress, especially for children.

“On child protection, UNICEF is working with partners to provide community-based psycho-social support to affected families, and prevention and response to violence and abuse of children including Sexual and Gender-based Violence,” he said.

In addition to its devastating effect on school children, a major impact of the flooding incident in Jigawa is mostly felt in the area of maternal health.

Between August and October, at least 33 newborn babies were delivered at three IDP camps in Dutse, Ringim and Guri Local Government Areas visited by PREMIUM TIMES, despite the prevalence of poor medical facilities across the camps.

In the Karnaya community, which is about 23 kilometres away from Dutse, the state capital, at least 25 women gave birth within the period. In Gerawa camp, Ringim, seven women put to bed while in Kadira in Guri local government area, a woman gave birth after they were displaced and their health facilities were damaged by the flood.

The multi-sectoral assessment led by UNICEF said “a total of 30 health facilities have been flooded and are out of use currently, while over 200 have been heavily affected, with various degrees of damage.” As a result, PREMIUM TIMES gathered that the health needs of the affected population, especially pregnant and lactating mothers, are not being met.

One of the leaders of the displaced people at Karnaya camp in Dutse, Falalu Ado, said 25 women had deliveries in the camp without being attended to by trained health personnel, adding that all the children were not immunised against killer diseases.

“Life here is difficult, assistance is not forthcoming, and we are living at the mercy of God. We need food and medical attention because there are also reported (suspected) cases of cholera outbreak in the camp,” Mr Ado lamented.

“Women are delivering babies in the camps without care; we are lucky enough to have the women delivering without complications. But they are being saved by God Almighty, and nobody in the name of a government official is assisting us in the camp.”

One of the nursing mothers, who only identified herself as Hadiza, said: “I am lucky because I delivered without any complication but since I delivered I had no medical attention and the baby is yet to be immunised against diseases.”

Another nursing mother, Ruqayya Sani, said she delivered the baby exactly eight days after they relocated to the camp. She, like many others, was not attended to by skilled birth attendants.

At Takazza community in the Guri council area, residents said the flood put over 2000 children at risk of malaria as the primary health centre in the community was flooded and destroyed.

The flood and the failure of the government to provide health services to the displaced persons may increase infant mortality in the state as the children birthed at the camps are yet to be immunised against children’s killer diseases, another resident said.

Already, the infant and maternal mortality rates in Jigawa are one of the worst in the country. Maternal mortality in the state is 174 deaths per 100,000 live births, a recent survey in 2021 revealed.

Kabir Ibrahim, the executive secretary of Jigawa State Primary Health Care Development Board (SPHCDB), said the women delivering at the Karnaya camp are willfully doing so as there are at least three vehicles meant for the Emergency Transport Scheme that are meant for the free service for mothers in the Karnaya community.

Mr Ibrahim, a medical doctor, said across the state, the government is providing free drugs for the displaced persons. He, however, acknowledged that IDP camps are not safe for delivery, thus, the women are facing the challenge of maternal health.