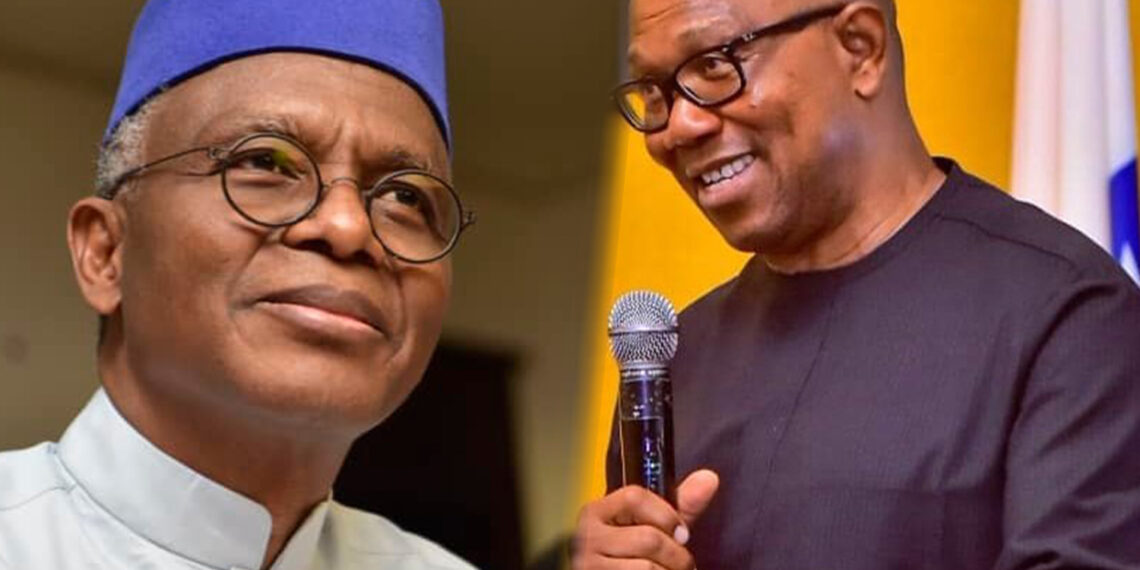 In a tweet on Monday, Mr El-Rufai said Peter Obi would be lucky to have 200 persons participating in the planned march in Kaduna in support of his presidential ambition.

The Kaduna State Governor, Nasir El-Rufai, stirred controversy on Monday when he criticised a claim by a Twitter user that about two million people would march in Kaduna in support of Peter Obi, an opposition presidential candidate.

Mr El-Rufai’s comment on Twitter generated hundreds of mixed reactions with some in support and others castigating the Kaduna governor.

Mr El-Rufai tweeted at 6:27 a.m. that Mr Obi would be lucky to have 200 persons participating in the support march in Kaduna.

In Kaduna? Not Kaduna Twitter? –
😂😂😂😂😂😂😂😂😂😂😂😂😂😂 I hope you get Two Hundred persons on the streets, including those ‘imports’ that can’t open their shops on Mondays, and came on overnight bus last night!!
I jus’ dey laff, wallahi tallahi!! – @KadunaResident https://t.co/KyOWqpcx8M

The governor posted this in reaction to a Twitter user, Abdullahi Zarma, who has been calling for two million persons to march in Kaduna in support of Mr Obi, the presidential candidate of the Labour Party.

No date has been fixed for the event.

In his tweet, Mr El-Rufai noted that even if the LP “imports” supporters from south-east states for the march, Mr Obi would not get the number.

“In Kaduna? Not Kaduna Twitter? – 😂😂😂😂😂😂😂😂😂😂😂😂😂😂 I hope you get Two Hundred persons on the streets, including those ‘imports’ that can’t open their shops on Mondays, and came on overnight bus last night!!

While some of his followers hailed the governor’s tweet, others described his comments as insensitive for mocking not only Mr Obi’s efforts but the sit-at-home order imposed every Monday on South-east states by the outlawed secessionist group, IPOB.

A Twitter user, @sammy_Sammy184, said the inability of the people in the south-east states to open their shops on Mondays is a clear depiction that the APC-led government in Nigeria has failed in its capacity to protect its citizens.

“Those imports who can’t open their shops on Mondays” is an own goal sir.

ALSO READ: How El-Rufai is contributing to insecurity in Kaduna State – Shehu Sani

“You just confirmed to Nigerians that the APC led government lacks the capacity to protect every Nigerian in all parts of the country. Or how do you explain that a group threatens your citizens to submission?” Sammy wrote.

FS Yusuf, a staunch supporter of Mr Obi on the social platform, said Mr El-Rufai’s comment is a clear indication that he is threatened and unsettled by the momentum of support for the Labour Party presidential candidate.

R.O Oyebanji (@royalty29), in support of the Kaduna State governor, said there is nothing wrong with the tweet. He accused Mr Obi’s supporters of “looking for issues where there is none.”

“Y’all like to look for issues where there are none. And this victim mentality is exhausting.

“There’s nothing tribalistic in what he said. That he lacks a “sense of decorum & finesse,” check. But he’s not the one who asked your people to stay home on Mondays. He just stated a fact,” Mr Oyebanji noted.

Another user, Orisa Segun, cautioned people against comparing Mr El-Rufai to Mr Obi. He said he can attest to Mr El-Rufai’s infrastructural strides in Kaduna but cannot say the same about Mr Obi as a governor of Anambra.

“I am not an El-Rufai supporter oooo. But I left Kaduna four years ago, the last time I went there I couldn’t recognise Kaduna again. Elrufai did more for Kaduna that will last a lifetime. Don’t even compare him to Peter Obi at all,” he wrote.

Mr El-Rufai is a chieftain of Nigeria’s ruling party, APC. The APC’s presidential candidate for the 2023 presidential election is a former Lagos State governor, Bola Tinubu.

Mr El-Rufai is known for airing his views about issues affecting the country including using public means like Twitter. Some of those views, like that of Monday, turn out to be controversial.

PREMIUM TIMES last week published the content of a letter the Kaduna governor wrote to President Muhammadu Buhari lamenting the security situation in his state and the growing influence of terrorists there.