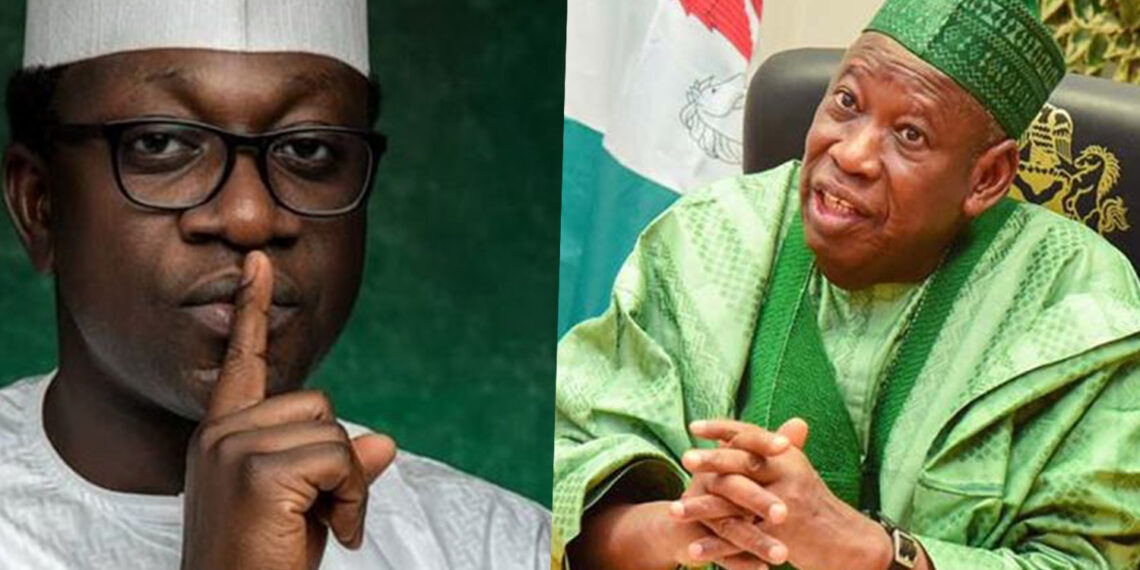 Abdulmumin Jibrin and the Governor of Kano State, Abdullahi Ganduje

Mr Jibrin was allegedly prevented from contesting for the Kiru/Bebeji Federal Constituency by the leadership of the party in the state.

The Governor of Kano State, Abdullahi Ganduje, on Sunday, directed the state secretariat of the All Progressives Congress (APC), to immediately resolve the crisis at Abdulmumin Jibrin’s Kiru/Bebeji Federal Constituency.

Mr Jibrin, a former lawmaker, is the Director-General of the Bola Tinubu Support Group, a group campaigning for the election of Bola Tinubu as Nigeria’s president.

He announced his resignation from the ruling All Progressives Congress (APC) on Twitter on Saturday.

The former lawmaker also promised to announce the party he would be defecting to within 24 hours.

Mr Jibrin was allegedly prevented from contesting for the Kiru/Bebeji Federal Constituency by the leadership of the party in the state.

“I have done my best for APC. It’s time to move on. I will announce my new political party within the next 24 hours Insha Allah. I will make a formal statement in due course,” Mr Jibrin said.

But the governor has reportedly directed the state secretariat of the party to resolve the grievance that forced Mr Jibrin out of the party after Mr Tínubu, a national leader of the APC, appealed to him to see that Mr Jibrin is placated.

The state’s chairman of the party, Abdullahi Abbas, in a statement said Mr Ganduje has urged the party to settle “the internal differences arising from interested parties seeking nomination to contest election into the Kiru/Bebeji federal constituency.”

Mr Abbas said the party secretariat has complied and summoned stakeholders meeting to discuss the disagreement.

He said letters have been sent inviting all the aspirants for the position.

Mr Abbas said Mr Jibrin has already accepted the proposal and will be attending the meeting.

He called on the parties to remain calm and cooperate with the party with a view to resolving the internal crisis. He further assured that the meeting would come up with a position acceptable to all the aspirants.

Mr Jibrin is believed to have been blacklisted by the state chapter of the APC after he made some comments interpreted in favour of the opposition candidate of the People Democratic Party (PDP) Abba Kabir, in the stiffly contested 2019 elections.

Mr Jibrin, who was, in 2019, declared winner of the Reps seat in his constituency, was later sacked by the Court of Appeal. The court ordered a rerun of the election in the Bebeji federal constituency of Kano State.

Mr Jibrin lost the rerun to Ali Datti-Yako of the Peoples Democratic Party (PDP), who is believed to have enjoyed the support of the APC leadership in the state.

Interestingly, Mr Datti defected to the APC some weeks after he was sworn in as a lawmaker.

Both men are among those vying for the seat of the Kiru/Bebeji Federal Constituency.

Article of Faith: Preaching another gospel, By Femi Aribisala