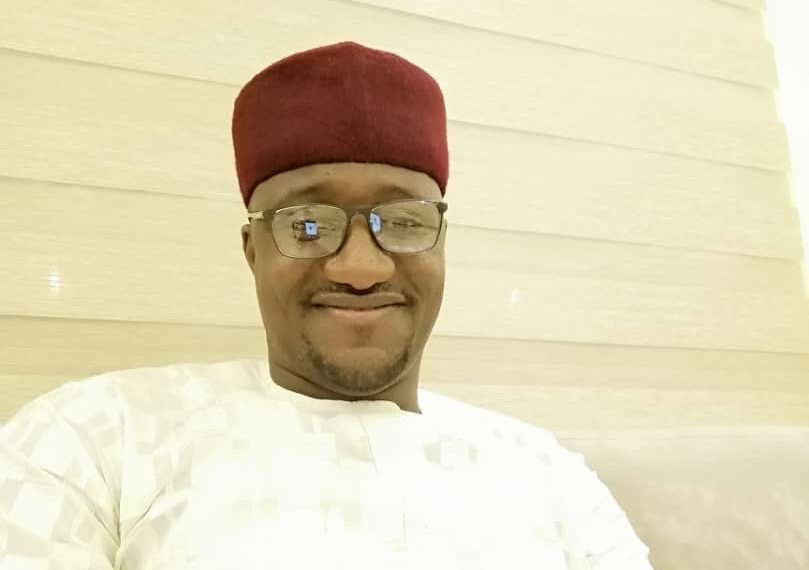 The Kano State House of Assembly has asked Governor Abdullahi Ganduje to sack and prosecute the suspended chairman of the state Public Complaints and Anti-Corruption Commission, Muhuyi Magaji.

This was contained in a resolution of the House reached on Monday during plenary presided over by the Speaker, Hamisu Chidari.

While presenting its report, the chairman of the 12-member ad-hoc committee that investigated the embattled anti-corruption czar, Umar Gama, said it made five recommendations.

These include immediate sack, arrest and prosecution of Mr Magaji as well as setting up an ad-hoc committee to investigate the financial activities of the commission from 2015 to date.

Speaking to journalists shortly after the sitting, the majority leader of the House, Labaran Madari, said the investigation found that the medical report submitted by the counsel to the suspended chairman for not honouring the invitation of the committee is fake.

He said the committee also recommended that the state civil service should take appropriate action against Isah Yusuf, a level four officer serving as an accountant at the anti-graft agency.

Mr Magaji’s ordeal began when the state lawmakers received a petition from the office of the accountant-general of the state that the anti-graft commission rejected an accountant it posted there.

“With due respect to Honourable Speaker and honourable House in general, I wish to present a complaint to you that on April 2021, the office of the accountant general released a posting of accounting staff to various ministries and departments including Public Complaint and Anti Corruption Commission.

“But this posting number C.5/AG/1.1/95 dated 15th March, 2021, the chief accountant posted to the commission have reported to the office of the accountant general, on 28th June, 2021 that he was denied taking over the financial activities of the commission as head of account as indicated in the posting letter. Copy attached.

“Furthermore, not only the chief accountant was denied to take over the responsibility as head of account, rather he was issued with a rejection letter reference number: PCAC/June/1/Vol. 1/SS/ dated 28 June, 2021 asking him to report back to the office of the accountant general, for his services were not needed in the commission.

“While an officer, a clerical officer for that matter, on grade level 04 is still maintain and act as head of account of the commission. Copy also of the rejected letter attached.

“Accordingly, this act by rejecting him as head of account of the commission violated section 28 (b) of Kano state financial management law which gives the accountant general power to provide the accounting staff to each government ministries or extra ministerial departments. Copy also attached of the stipulated law.

“Based on the above, the office of the accountant general is kindly appealing to the honourable House to take appropriate measures towards the complain please.

“Shehu Abbas Mu’azu, the accountant general of the state.”

After the petition was read in the House, the House leader and member representing Warawa constituency, Abdul Madari, advised the lawmakers to allow the Committee on Public Complaint and Anti-Corruption to investigate the matter, and report back for further deliberation.

The deputy speaker and member representing Sumaila constituency, Hamza Masu, supported the position of Mr Madari and called on the House to suspend Mr Rimingado to allow a thorough investigation.

Also, the member representing Rogo local government, Magaji Zarewa, also suggested that the chairperson be suspended pending the outcome of the investigation.

After the deliberation, the House suspended Mr Magaji for one month and constituted a committee to investigate the matter.

The Committee has Deputy Director Legal in the House as secretary and the secretary Public Account Committee as co-secretary.

The adhoc committee had invited Mr Magaji to appear before it on July 14. However, on the scheduled day, Mr Magaji through his counsel, Mr Fari, asked for some facilities to enable him prepare his defence.

Mr Fari also told journalists that his client could not appear before the house that day because he was undergoing diagnosis at the National Hospital, Abuja.

He said he had submitted a copy of the laboratory form and letter to the secretary of the ad-hoc committee, requesting another time for him to honuor the invitation of the house after his medical appointment.

“For two reasons he (Mr Magaji) is not here. One on health ground, number two we wanted to have adequate time and have facilities to prepare for our defence.

“The only document that we received is the letter dated the 12th day of July, from the House inviting to appear before the committee without indicating the name of the complainer or the petitioner, the allegation against him, nothing.

“We are requesting for the copy of certified true copy of the petition written against him. Because he was not served with the petition, we heard it over radio. 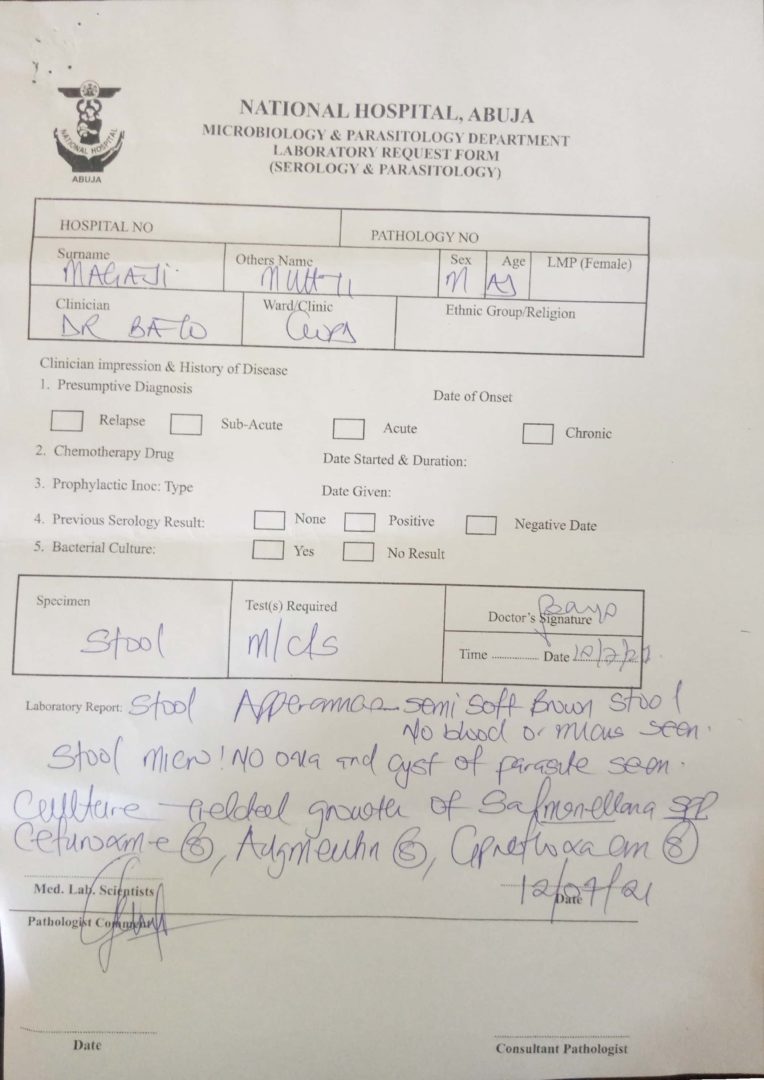 However, the National Hospital, Abuja, in a letter dated July 19 and sent to the Clerk of Kano state House Assembly, said it had no patient named ‘Muhuyi Magaji’ in its record and no folder was opened in that name.

“Kindly refer to your letter with ref. No KNHA/CON/077 dated 16th July, 2021 on the above subject matter, in which you requested the hospital to verify the authenticity or otherwise of attached medical report/documents.

“Following your request on the above, and subsequent investigations, we wish to state the following findings:

“There is no patient named ‘Muhuyi Magaji’ in their hospital record and no folder was opened in that name.

“That by our records, the name and signature of the doctor (Dr. Bayo) on the medical report do not belong to any staff of National Hospital, Abuja.

“Laboratory investigation in the National Hospital are no longer manually written on paper, but electronically transmitted.

“In the light of the above Sir, the medical report/documents which you attached it’s photocopies are not authentic.

“On behalf of the Chief Medical Director, please accept our warm regards.

“Dr A. A Umar, Director, Clinical Services/CMAC on behalf of the Chief Medical Director.” 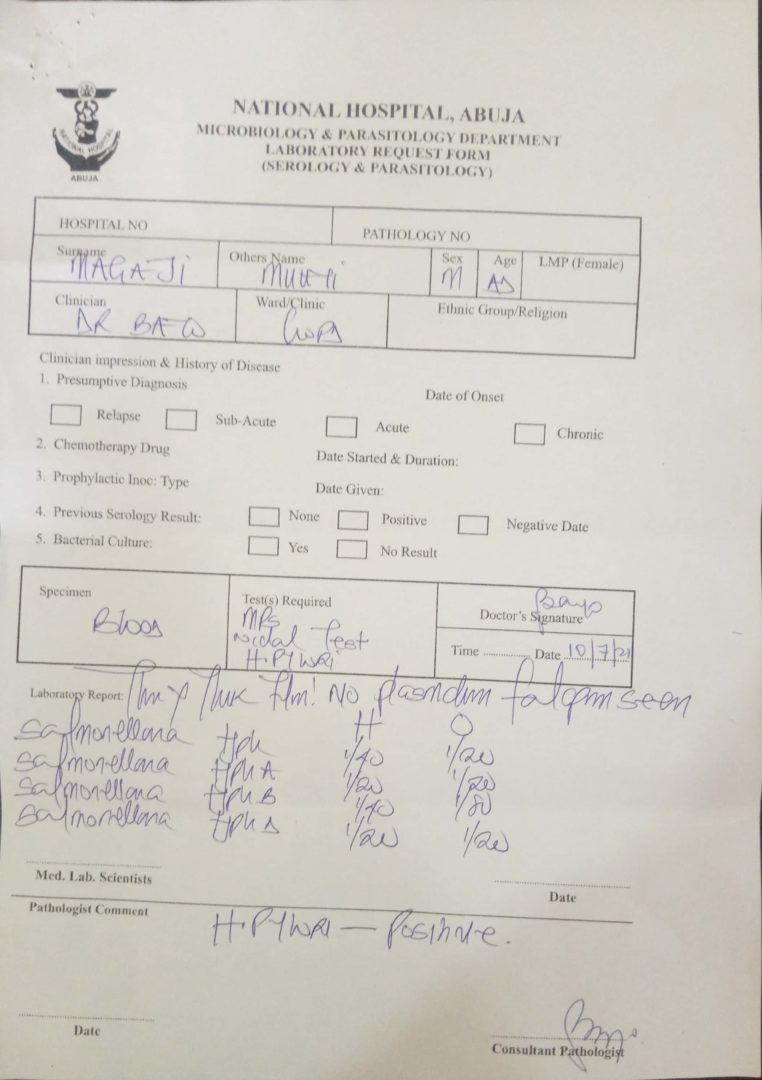 A Kano-based lawyer, Abdulaziz Ahmad, said Mr Magaji faces up to 14 years in prison for presenting false medical report to the state House of Assembly.

Mr Ahmad said the act amounts to ‘forgery’ as stated by section 362 of Penal Code of Northern Nigeria.

According to Mr Ahmad, the ingredients of that offence include presenting false document to public institution with the intention of misleading that institution to believe the said document is genuine and is from lawful authority.

The lawyer added that section 364 of Penal Code stipulated a fourteen year jail term for such offence with imprisonment or both imprisonment and fine.

He described Mr Magaji’s alleged act as “Illegal and embarrassing’ and should not be swept under the carpet.

The legal practitioner suggested that the matter be forwarded to the police for thorough investigation. 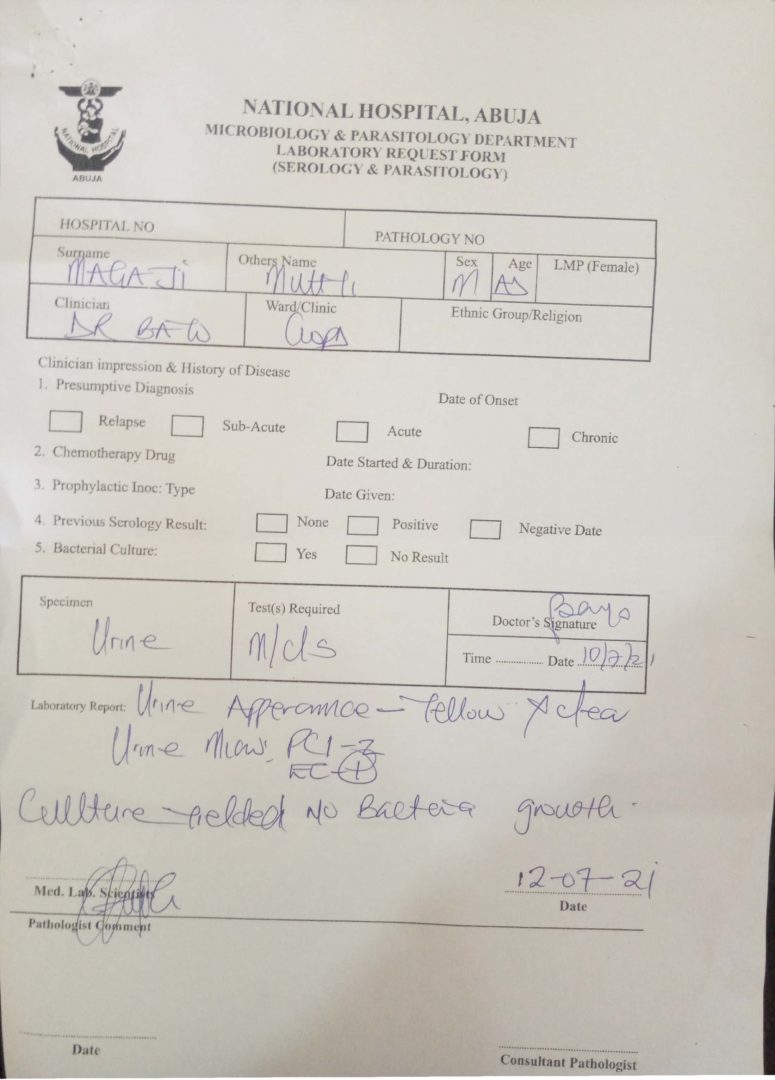 What law says on forgery

Also section 364 of the same penal code says: “Whoever commits forgery shall be punished with imprisonment for a term, which may extend to fourteen years or with fine or with both.”