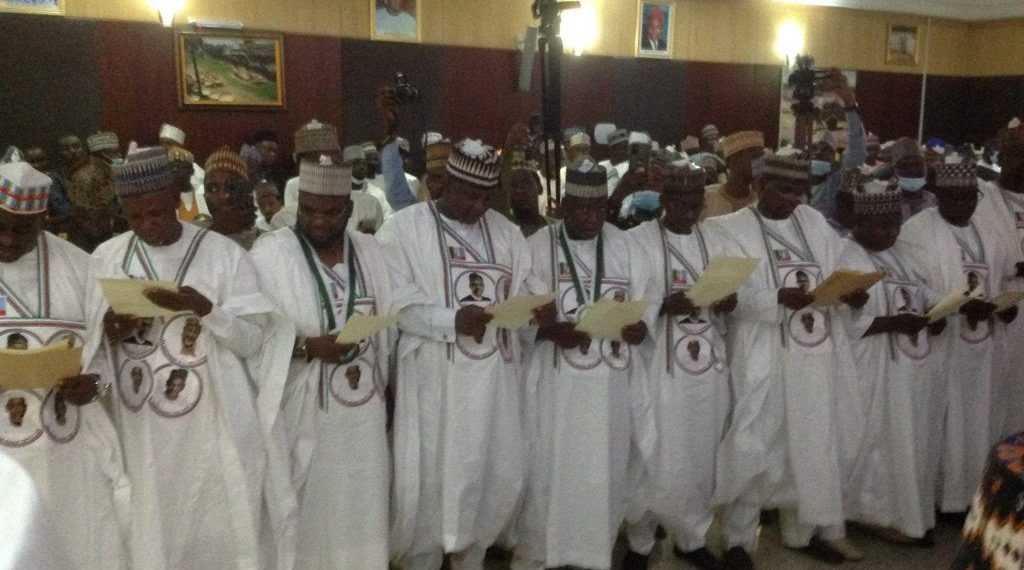 A cross section of the newly elected council chairpersons at their swearing-in ceremony on Thursday in Dutse.

The governor urged the chairpersons to emulate their predecessors by focusing on people-oriented programmes, mostly initiated by the state government, to make positive impacts on people's lives.

At the ceremony on Thursday in Dutse, Mr Badaru said the state was faced with numerous challenges.

“I want to advise you to always put the fear of God in the management of resources in your respective councils, so that God will guide you,” he said.

He said the state local councils had made lots of progress, through a developmental agenda, in spite of economic and social challenges facing the state.

The governor urged the chairpersons to emulate their predecessors by focusing on people-oriented programmes, mostly initiated by the state government, to make positive impacts on people’s lives.

“We introduced work-plan to make sure that projects get to the people and they complied and they worked and that have shown us a lot of success.

“We will continue with that arrangement because it guided the chairmen to engage in projects that were really people-oriented.

“I congratulated them for really abiding by the rules and doing what they had to do.

“They could have said no, because they were the chief executives of their councils.

“We did not dictate to them on what to do, but we consulted and discussed and came up with things that we believed were right and they believed also that what we have done was right,” he said.

Mr Badaru urged the state residents to give necessary support to the new chairmen to enable them deliver dividends of democracy to the people.