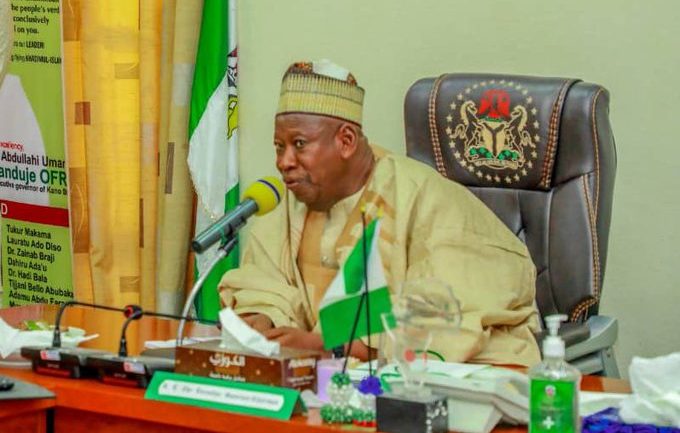 Mr Ganduje was caught on video, in 2018, collecting cash in dollars from a contractor in the state.

Governor Abdullahi Ganduje of Kano State has approved the State’s Anti-Corruption Strategy plan 2019-2023, to strengthen state institutions in their fight against corruption, the spokesperson to the governor, Abba Anwar, said in a statement issued on Tuesday in Kano.

According to the statement, the governor signed the document in the presence of Muhuyi Magaji, executive chairman, Kano State Public Complaints and Anti-Corruption Commission, emphasizing that the strategy would usher in an anti-corruption crusade in the state.

“All these initiatives are borne out of our desire to ensure transparency and accountability in governance, as our administration is determined to keep the fight alive.

“The Anti-Corruption Strategy will also go a long way in showcasing more commitment of the present administration towards the fight against corruption in all its ramifications.

“Our administration will continue to support the activities of this all-important Commission under Muhuyi Magaji Rimin Gado, without interference. We will remain ever ready to work with all well-meaning initiatives that can move Kano forward,” Mr Ganduje said in the statement.

The governor lauded the leadership of the ant-graft agency, Rule of Law and Anti-Corruption (RoLAC), and other development organisations, for their support towards building a corruption free society.

He noted that the strategy was anchored by the anti graft agency in partnership with government agencies, Civil Society organisations (CSOs), RoLAC, and other stakeholders, who he commended for their support to ensuring a corruption-free society.

According to him, the document aimed at designing a corruption prevention strategy, encouraging public engagement, ethical re-orientation, enforcement and sanctions, recovery and management of the proceeds of corruption as well as allied offences.

This singular effort, the governor said, showcased the administration’s zero tolerance for corruption, through various initiatives and fulfilling his administration promise of ”providing a vibrant leadership with people of proven integrity, and of legal and civil society backgrounds, to ensure credibility in all government affairs”.

Rimin Gado said the state government joined the Open Government Partnership (OGP) in 2017; to ensure openness and transparency in government business, noting that since then the governor had established Transparency and Accountability Units (ACTUs) in all of the state’s Ministries, Departments and Agencies (MDAs),

”This is jointly supervised by the state Anti-Graft Agency and the Office of the Head of Civil Service, with support from development partners such as RoLAC.

The document will be presented to the public on the International Anti-Corruption Day billed for Dec. 9, he said.

PREMIUM TIMES reported how Mr Ganduje was caught on video, in 2018, collecting cash in dollars from a contractor in the state.

The Kano governor frustrated a probe of the scandal by the state assembly of as he secured a court injunction to halt the inquiry.

Journalist Jafaar Jafaar, who sourced the video, appeared before the lawmakers and defended the authenticity of the video.

Mr Ganduje, who enjoys immunity from prosecution as a sitting governor, has not been probed for the scandal by any anti-graft agency.

The Kano governor won his re-election last year despite the bribery scandal.

How police officers shot my son dead in my presence — Woman