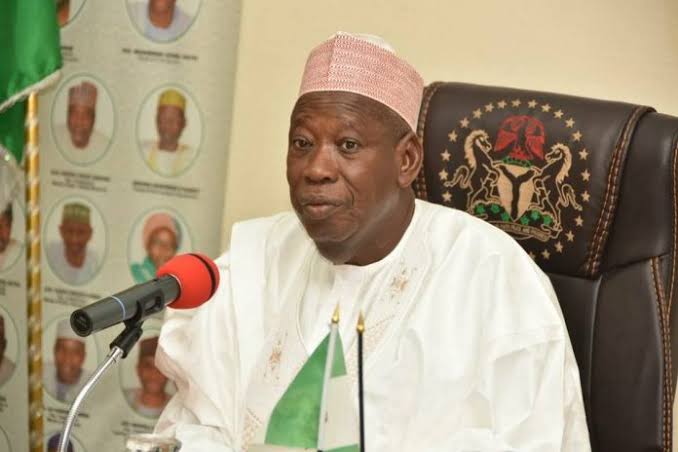 The Governor of Kano State, Abdullahi Ganduje, is requesting from the state’s House of Assembly, an amendment to the state’s emirate law 2019 to include two emirate officials earlier sacked by two former emirs.

The speaker, Kano House of Assembly, Abdul’aziz Gafasa, during plenary last Wednesday, announced Mr Ganduje’s request. The lawmakers are expected to deliberate and decide on the request, possibly before the end of July 2020.

Mr Babba-Danagundi challenged his removal by late Mr Bayero in court. However, 17 years after, the Supreme Court ruled in favour of the late emir, upholding the emirate’s resolution.

Following the reappointment of Mr Babba-Danagundi as ‘Sarkin Dawaki Babba’ by the current Emir of Kano, Aminu Ado-Bayero, Mr Ganduje specifically requested the state’s assembly to amend the emirate law 2019 to include the officials as Kano kingmakers. The junior Ado-Bayero, deposed by Emir Sanusi, is now the new ‘Wamban Kano’, also a kingmaker, if the assembly formally agrees to Mr Ganduje’s request.

How the officials were sacked

The dismissed traditional leader, Mr Babba-Danagundi, allegedly declined to honour an invitation to appear before a committee set up by late Mr Bayero, to investigate his excesses.

Mr Babba-Danagundi challenged his removal at the state’s high court where the court ordered for his reinstatement. The Kano emirate appealed the judgement. However, the appeal court also ruled in favour of the dismissed emirate official.

The Kano Emirate Council, under deposed Mr Sanusi, again, appealed the ruling of the lower courts to the Supreme Court, where the apex court ruled against Mr Babba-Danagundi.

The apex court’s judgment was delivered six years after Mr Bayero’s death and seventeen years after the dismissal of the embattled Mr Babba-Danagundi.

The former ‘Chiroman Kano’, Sanusi Ado-Bayero, was also stripped of his traditional title following his alleged refusal to accept and pay homage to the then newly crowned emir Muhammadu Sanusi.

The Emir, Mr Sanusi, following his appointment in June 2014, sacked the ‘Chiroman Kano’, the junior Ado-Bayero, for refusing to accept him as the new emir of Kano.

He has now been appointed as the new ‘Wamban Kano’, also a designated kingmaker. He has since paid homage to his brother, Emir Aminu Ado-Bayero.

The state’s Commissioner for Information, Muhammad Garba, defended Mr Ganduje’s decision for considering Mr Babba-Danagundi as a Kano kingmaker, despite the Supreme Court’s verdict against the embattled official.

Mr Garba said due to the influence of the traditional title of ‘Sarkin Dawaki Babba’ that was just created, the government viewed the imperative of including the officials as Kano kingmakers in the Kano’s emirate council.

The official said contrary to the public perception of disrespect to the Supreme Court’s judgement by recognising Mr Babba-Danagundi as a kingmaker, the state respects the ruling.

Mr Garba told BBC Hausa that the government decided to include Mr Babba-Danagundi as a kingmaker through a different title. Before the court’s judgement, he was the ‘Sarkin Dawaki Maituta’ but now referred to as ‘Sarkin Dawaki Babba,’ the official said.

Concerned parties have warned that political interference might likely erode the influence of Kano traditional institutions following controversial appointments, as well as dethronement of Emirs, allegedly being influenced by political interest.