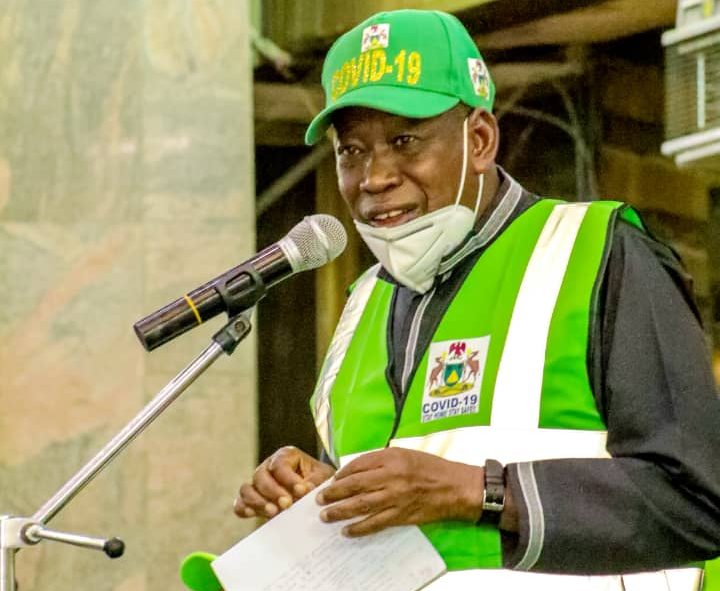 Governor Abdullahi Ganduje on Tuesday rejected the federal government’s findings which attributed 50-60 per cent of recent ‘mysterious deaths’ in Kano to COVID-19.

Mr Ganduje spoke at the Kano government house while receiving a new report of verbal autopsies conducted on the causes of these deaths.

A verbal autopsy is carried out to find the cause of death when the corpse is not physically available or has been buried.

The governor, who described the federal government’s report as misleading, said he will pass the ‘new findings’ to President Muhammadu Buhari, the chairman of the presidential task force, the minister of health, and the national coordinator of the technical committee.

He also hinted that the report would be translated into Hausa “for the consumption of the people at the grassroots so that they would come to know the true situation and (have) clearer picture.”

The minister of health, Osagie Ehanire, had earlier linked 60 per cent of mass deaths recorded in Kano State to COVID-19 infection.

An elated Mr Ganduje congratulated the committee for a good job.

“This report, which was scientifically conducted, has put to rest all postulations, predictions, permutations and all hues cries about the mysterious deaths.

“When I went through the literature review, I understood how good the findings are.

“So it is good for all to understand that any report that could not pass the test of validity and reliability, such report is misleading,” he said apparently referring to the FG report.

Presenting the findings, Mukhtar Gadanya, who read out all parts of the report said “A retrospective study of mortalities was conducted over 2 weeks (27th April – 15th May 2020); across 8 metropolitan local government areas (Gwale, Fagge, Tarauni, Kumbotso, Ungogo, Nassarawa, Kano Municipal and Dala).”

According to him, the mortalities in the identified LGAs “were line-listed, which made a provision for the questionnaire to be administered house to house.”

He revealed that, as part the committee’s scientific approach, “mortalities reviewed were for a period of 1 month (1st April to 2nd May 2020)”.

“Relatives of those who passed away were interviewed by respective Ward Focal Persons (WFP), using a structured questionnaire into an electronic platform (ODK).

“Data from the questionnaire were reviewed for categorisation into most probable causes of mortality by medical specialists using ”two-symptoms’ criteria (at least presence of two of any of fever, cough and shortness of breath),” he added.

According to Mr Gadanya’s account, “an inter-play of various factors contributed to the mysterious deaths, causes this study shed light on. Mortality in community is cyclical and vary by seasons and months”.

Mr Gadanya disagreed with the earlier report given by the minister of health saying that, “COVID-19 might have contributed 15.9 % of the cases of mortality, but within the limitations of the verbal autopsy method, that cannot provide confirmation.

“If the mysterious deaths were COVID-19 related, the deaths could have come more from local governments that have more COVID-19 cases.

“Tarauni local government for example, with 100 confirmed COVID-19 cases is the 1st in pandemic ranking, but in the mysterious deaths it is rated 7th,” he said.