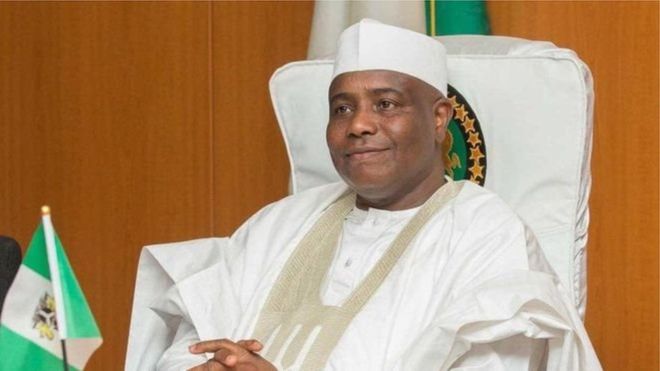 Governor Aminu Tambuwal of Sokoto State on Tuesday presented N202.4 billion as proposed appropriation for 2020 fiscal year to the state House of Assembly for approval.

The governor said the budget, tagged: “Budget of Sustained Socio-economic Development and Inclusiveness,” would focus on completion of projects started in 2019 and the execution of new ones.

He said the budget was carefully formulated in tandem with the state government’s commitment to addressing the fundamental needs of the people in all parts of the state.

“Therefore, I humbly seek the kind collaboration of the Honourable Members as I briefly and summarily highlight some of the provisions and proposals for the incoming year i.e. 2020,“ he said.

“The budget will among others focus on completion of the projects started in the proceeding year and ensure prompt execution of new ones in line with the development policy agenda of the present administration.

“Despite the economic predicament in the country which also affected the State in recent times, remarkable achievements have been recorded and, we are prepared and determined to achieve more in the subsequent years, God willing.

“Happily, this year is the beginning of our renewed mandate and it is therefore imperative on our part to consolidate on all major achievements, and to as well strive to provide more on the development and general security and welfare of the good people of Sokoto State.

“As a people with full faith in Allah, we will continue to pray for more guidance and protection. In the preceding year, the State had been faced with security challenges as a result of banditry activities in some Local Governments areas.

“Moreover, with the co-operation and understanding of the security agencies, the situation has been brought under control and our people are going on with their normal businesses,“ he said.

The governor said it was a turning point in the history of governance in the state that a legislative arm, constituted by majority members from the opposition party, chose to close ranks to work for the purpose of serving the people and advancing the state.

“Mr Speaker, Honourable Members, I commend you for this exhibition of statesmanship and patriotism over and above partisan considerations.

“This milestone development holds great promise as we poise to take our State to higher levels of development in all sectors.

“I wish to assure the people of Sokoto State that we have laid a solid foundation in our first tenure for greater socio-economic development through a commitment to policies and programmes that have had relevance to the needs and aspirations of our people,“he added.

Tambuwal further explained that the policy thrust of the budget was to ensure sustainable economic development through substantial investment in critical sectors.

He listed the sectors as education, agriculture, healthcare delivery, exploration of mineral resources, investment in renewable energy and infrastructure.

“We will prioritize effective resources management and seek intervention in areas with high potential to create job opportunities, generate income and improve revenue generation,“ he said.

The Speaker, Aminu Achida, assured the governor of the lawmakers’ commitment to ensuring speedy passage of the bill to maintain the frequency of development in the state.