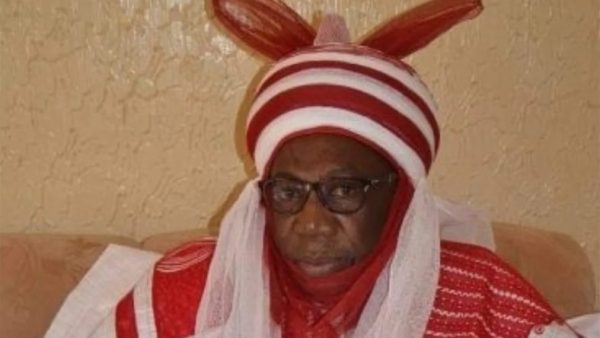 Exactly three weeks since the Magajin Garin Daura, Musa Umar, was kidnapped by gunmen at his residence in Daura, President Muhammadu Buhari’s home-town, no news of his whereabouts has been heard yet.

Mr Umar was whisked away by four gunmen in Daura town on May 1.

The gunmen, suspected to be kidnappers, arrived Daura town at about 7 p.m., when Mr Umar had just returned from the evening Magrib prayer.

According to a witness, the kidnappers came in a Peugeot 406 saloon car shooting sporadically in the air. They grabbed Mr Umar and forced him into the car, then drove away.

After the gunmen left, the Daura council chairman, Abba Mato, and hundreds of sympathisers came to Mr Umar’s residence, to discuss the incident.

Meanwhile, PREMIUM TIMES spoke with residents of Daura who said that people of the town are still in shock since the incident.

Mamman Lawal, a witness and resident of Daura, said people are still in shock.

“Let me tell you, we are not happy here. The Magajin Garin Daura is a prominent personality that should not take this long in the hands of Kidnappers. When they took him away, we all were not happy but we had hoped he will return the next day. This is exactly three weeks and nothing has been done.

“He is a popular man and people are always around him. Now they are all missing him. Nobody knows if he is alive or not because nobody is saying anything including the security operatives. Maybe they (police) are being tactical.”

Also, Mohammed Abdullahi, a resident, said prayer sessions are being held for his safe return.

“There has been prayer sessions in Daura and even surrounding towns begging God to intervene. But for us here, we are not happy at all.”

When contacted, the Katsina Police Public Relations Officer, Gambo Isa, told PREMIUM TIMES that the police are still investigating and have made several arrests.

“We are investigating and we have also made some arrests. I cannot give you the number of arrests so it does not jeopardise the work in progress.”

Mr Isa said that the police also made ‘recoveries’ since the search began “and are making progress.”

The Emir of Katsina, Abdulmumini Usman, recently called on the President Buhari to quickly intervene in the upsurge in kidnapping cases in the state.

He made this call at the national launching of the distribution of cotton seeds/inputs to farmers for the 2019 planting season by the minister of agriculture, Audu Ogbe, and Central Bank governor, Godwin Emiefele, in Katsina.

According to Daily Trust, the Emir told Mr Ogbe, that farmers and herdsmen “who are the target beneficiaries of government initiatives have abandoned their farms and herds as killings and kidnappings spiral in the region.”

“Every day, I receive reports of kidnapping and killings from the district and village heads,” the Emir said, as reported by Daily Trust.

Speaking to the visiting minister, he said: “Tell the president that we have to take care of our people, security first. All these programmes, as good as they are, cannot be (successful) without security. Security is first and fundamental.

“What are you to gain by killing, kidnapping people? It’s very unfortunate. I have not seen this kind of country; how do we live like animals? Three days ago, Magaji Gari (of Daura emirate council) was abducted. Nobody is safe now, whether in your house or road, wherever you are.

“What we want you to do for us is to stop the fight. Many people have deserted, abandoned their farms in fear of kidnapping and killings and other atrocities. It’s very unfortunate.”

Also, federal lawmakers in both the Senate and House of Representatives lamented the worsening insecurity in the region. Between April 11 and last Thursday, the Reps twice summoned Mr Buhari over the crisis.

Meanwhile the police in Katsina State on Monday said they have arrested “more than 70 suspected kidnappers since across the state.”

The state Commissioner of Police, Sanusi Buba, said this at a press briefing in Katsina on the achievements recorded by ‘Operation Puff Adder’ in the state.

Others were five motor vehicles, 44 motorcycles, 200 cartridges, 25 litres of Jerry cans loaded with fuel, five bags of food items, and over 1,500 ammunition, among others.

The commissioner said the police had succeeded in arresting the kidnappers of Governor Aminu Masari’s 80-year-old mother-in-law, Hauwa Yusuf.

The commissioner further said the suspects had confessed to the crime and were now assisting the police in their investigation.

However, a day after the police announced the arrest, 18 farmers were killed by bandits in Katsina State.

Katsina is, however, not the only state affected by the activities of armed criminals.

Kidnapping for ransom, banditry and other forms of violence have become rampant across the country in the past year.