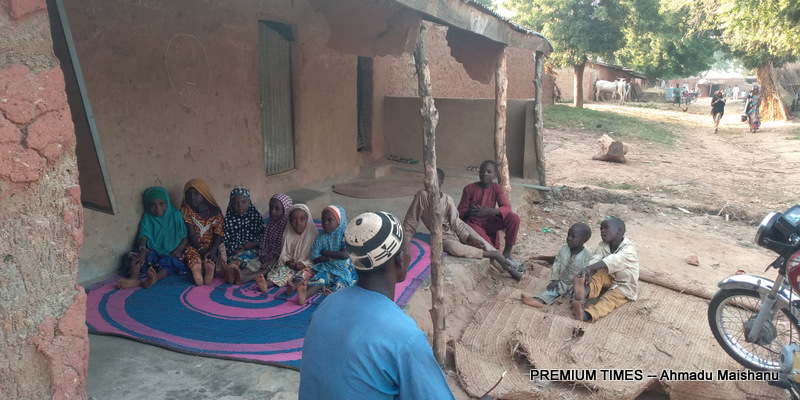 Hara in Jigawa State looks like something snatched from a forgotten past and forcibly transplanted into the 21st century.

The community, which is 20 kilometres from the state’s capital, Dutse, lacks all the basic amenities – potable water, electricity, health facility, schools.

Despite its nearness to the state capital, like a tiny mole on the back of a giant, it appears the government of the vast state has practically forgotten the community exists.

Mr Idris told PREMIUM TIMES that despite repeated promises from successive administrations in the state, no school has been built in the area even after the community voluntarily donated a piece of land for the construction of the school.

“I, as the village head, I constituted a youth committee headed by Alhaji Mas’ud. The committee is mandated to follow-up the promises made by the state authorities to actualise the building of a school. But their efforts have been eroded, authorities are not willing to fulfil their promises,” Mr Idris said.

“Because of the absence of a conventional school in this community, our children focus only on farming because that’s the only option for them.

“Only a few can afford to transport their children to neighbouring communities for schooling daily.

“We also requested health facility, access road with which to transport our farm produces.

“We don’t have electricity and we’re not requesting for that. What we need is a modern school so that our children can compete with their peers from other communities,” he said.

Only a few children, allowed by their parents, trek as far as seven kilometres daily before they can reach the nearest school.

Muntari Sani, a youth leader in the community, said the long distance between Hara and the closest school means that children from the community start school much later than other children in other parts of the country.

He explained that only children of certain age brave the long trek to school.

He said it becomes more difficult to convince parents to allow such children to attend school when they are needed in the farms.

Lamenting the neglect of the community by the government, Mr Sani said the only government facility in the area is a solar-operated water tank, which was a millennium development goals [MDGs] project.

“It is disheartening to tell you that, a member of House of Representatives, Tijjani Gaya, promised to build a school and buy graveyard for the community. But unfortunately, he only provided the graveyard without building the School.

“Politicians like Kemba Madobi, Musa Sule, came here during electioneering campaign in 2015, they told us that the community is theirs, they promised to address the major problem facing the community. Since they were elected, they didn’t come back to the community to see whether we’re still in existence,” he said.

When contacted for comments, the Secretary of the Jigawa State Universal Basic Education Board [SUBEB], Abubakar Dahiru, admitted that the community is due for a school.

He, however, said the community should renew its request for a school ”to be considered.”

The chairman, Civil Societies Forum, Jigawa State, Musbahu Basirka, said it is imperative for policymakers to understand the need for formal education for children.

Mr Basirka made reference to goal four of the Sustainable Development Goals (SDGs) which calls for inclusive and equitable quality education for all children and adolescents.

“These can only be achieved when we can build and upgrade our educational facilities both in the urban and rural communities. Parents and state authorities need to know that education is a right of all children that must be given to them,” he said.

A lecturer at the Department of Criminology and Security Studies at Federal University, Dutse, Jigawa State, Mustapha Hussein, said if children are not educated, ”the anticipated development will be at stake and poverty and crime will become the order of the day.”

“The government should know that there’s nothing they can do better than educating the younger generation, providing the basic social amenities to the citizens irrespective of where they live.

”The government needs to take a giant stride for Nigeria to be able to attain the target of Sustainable Development Goals [SDGs] of 2030.

“Even without the SDGs, Nigeria’s national policy on education states that basic education for all Nigerian children is a right, not a privilege. All children have the right to six years of primary education and junior secondary school,” Mr Hussein said.