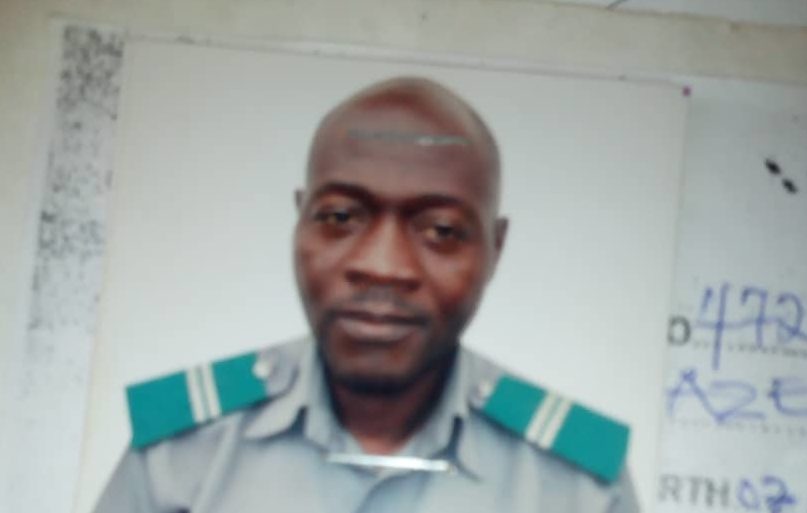 The custom officer that was killed

A Customs officer on Monday was reportedly killed by a suspected rice smuggler in Gumel Local Government Area of Jigawa State.

A witness said the suspected smuggler ran his vehicle over the Customs official at Emir’s Palace road in Gumel town in a desperate move to escape arrest.

The Customs’ spokesperson for Kano/Jigawa area command, Isa Dan-Baba, confirmed the report to journalists on Tuesday. He identified the deceased as Azeez Tunde-Wasiu. He said the officer died while receiving treatment in Gumel, Jigawa State.

Mr Dan-Baba said the suspected smuggler also hit two other victims at Gidan Gawo quarters. They are identified as Usman Abdu, 32, and Adda’u Dahiru, 29, who were on a motorcycle.

They are currently receiving treatment at Gumel hospital.

The Customs officials were said to be in private car, Peugeot 406, without a registration number. They were pursuing the suspect, who was said to be in a Volkswagen Golf, from Sule Tankarkar road towards Gumel town.

After the Customs vehicle overtook the smuggler’s vehicle, an official hastily dropped off with an attempt to shoot. However, the suspect confronted the official, knocked him down and ran over him with the vehicle. The vehicle was suspected to be loaded with smuggled rice.

The witness told PREMIUM TIMES that the smuggled parboiled rice was allegedly coming from Niger Republic and was being conveyed to Kano State.

“The incident occurred at Gumel town around 11 a.m.,” he said.

“Many residents on motorcycles helped the officials, in an attempt to arrest the fleeing smuggler after they learnt that he hit and killed an official. However, the suspect escaped through a bushy Gagarawa road, after he generated cloudy dust, and ran through it.”

The federal government had attributed the spate of smuggling into the country to the protocol of ECOWAS, being abused by neighbouring countries.