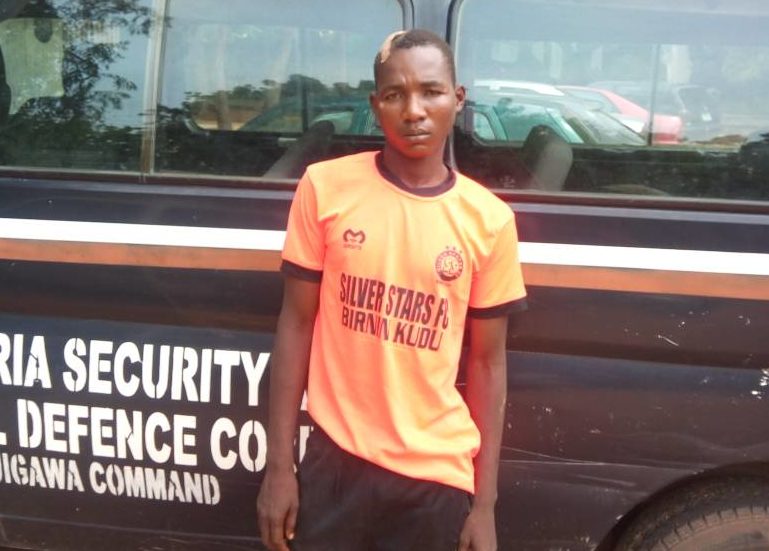 Student Arrested by the NSCDC

The Nigeria Security Civil Defense Corps (NSCDC) has arrested an expelled student for allegedly trying to fleece unsuspecting Nigerians with fake letters of employment of the security agency.

NSCDC spokesperson in Jigawa, Adamu Shehu, said the suspect, Nasiru Abba, was expelled from the School of Nursing Jahun in the state.

“The suspect’s family members told NSCDC that they had being warning him about his dubious characters; that one day he will be arrested and face the wrath of the law,” Mr Shehu told journalists on Thursday.

“He was arrested after a man, Musa Inuwa, whose child Mr Abba requested to pay N120,000 by the suspect to be issued with appointment letter of NSCDC.

“Already the sum of N1,700 was collected as fee for employment form by the suspect. The father of the victim, an okada rider, became suspicious and reported the matter to a nearest NSCDC office in the state and the suspect was lured to come with appointment letter and collect his money. That was how he was arrested by our men,” said the spokesperson.

Mr Shehu said the suspect initially claimed to be fronting for one big personality in Abuja, but was revealed after thorough investigation to be the sole mastermind of the scam.

“At the time of the arrest, three forged employment letters of Nigeria Security and Civil Defense Corps (NSCDC) were found in the suspect ‘s possession, already allocated to one Yahaya Sabo Musa Inuwa.

“Also, while he was being investigated, two brothers, Idris Isa and Isma’il Isa, came along with two forged copies of employment letters of Nigeria Immigration Service issued to them by the suspect.

The state command of the Corps warned members of the public, especially youth desperate for employment, to be cautious so as not to fall victims of forgery and scam.