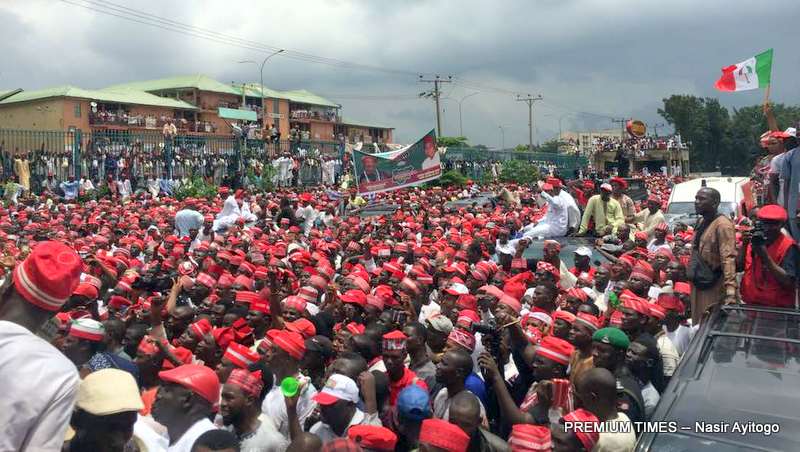 Crowd as Rabiu Kwankwaso declaring to run for President

2019: While Kwankwaso declared in Abuja, hundreds gathered in Kano to denounce him

In what appears a twist of events for ex-Kano governor, Rabiu Kwankwaso, while he launched his presidential campaign in Abuja, hundreds of Kano residents who said they were his supporters declared support for the All Progressive Congress (APC).

The residents, mostly from the Amalgamated Commercial Motorcycles and Tricycles Owners, Repairers and Riders Association of Nigeria (ACOMORAN), Kano State branch, also burnt their red caps (an emblem for Mr Kwankwaso’s supporters) to signify their exit from the senator’s fold.

The state governor Umar Ganduje, an estranged protégée of Mr Kwankwaso, leads the APC in Kano.

The event, which was held at Sani Abacha Indoor Stadium Kofar Mata, Kano, on Wednesday was anchored by the chairman of APC in Kano, Abdullahi Abbas.

Mr Abbas assured the new members that their interests will be taken care of.

“Kano state is firmly under the control of our great party, All Progressives Congress (APC). With this new development also, it shows the glaring weaknesses of all other political parties answering the name of opposition parties in the state.

“Today, we are reassuring all those who care to listen, that, the over 5 million votes we promise to give President Muhammadu Buhari during the next year’s general election, is indeed feasible. These young people, who decamped to the ruling APC, promised to also work tirelessly for the victory of our party at all levels, come 2019,” he said.

It was also a wake up call for those dreaming “to take away Kano from APC”, he said.

“Kano people are solidly behind our dear President Muhammadu Buhari. As such, it is only a day dreamer who can think of fading the popularity of this gentleman (Buhari).

“We are delivering in all the areas of our campaign promises. We promised to continue from where past administrations either stopped or abandoned. That was why we are able to complete the two ultra-modern hospitals of Muhammadu Buhari Specialist Hospital, Giginyu and Sheik Isyaka Rabi’u Paediatric Specialist Hospital, Zoo Road, left behind by previous administration.

“We are also able to complete so many projects ranging from roads construction, flyover, like that of Murtala Muhammad way, which is few weeks to completion, among other projects abandoned by the immediate past administration. While consolidating other aspects left behind by the past administration, we are also initiating other projects and programmes. All with the view to making our state develop rapidly without bothering to look back,” Mr Abbas said.

In different speeches, the commissioners of Local Government and that of Information, Murtala Garo and Muhammad Garba, thanked the defectors.

Mr Garo said, “We are very grateful to Allah, that our government, under the able leadership of Dr Abdullahi Umar Ganduje, is doing its best to see to the development of the state. This is done in line with the spirit of people-oriented policies of President Muhammadu Buhari.

“All we need from you, the electorate is your glaring understanding of our policies and programmes. It is on record that, all we are doing is for the development of our state and the country in general. What is needed from you, is continued support and well wish, just as what we are enjoying from you now.”

Mr Garba called on all the new entrants to make sure that they remain ready with their voter cards to vote in their preferred candidates.

He urged them to remain committed and steadfast in their loyalty to the party and leaders as well.

“It is our belief and commitment to the system that can help and give all the necessary encouragement to our leaders,” he added.

In his remarks, the leader of the defectors, Usama Dala, queried why Mr Kwankwaso refused to launch his presidential campaign in Kano.

“Kwankwaso’s inability to maintain his supporters in Kano; can’t you see how our people are deserting him day and night in the state?

“We were confronted in the first place, that Kwankwaso wanted to use us to launch his presidential campaign in Kano. We said that could not be possible. All we know and firmly believe in, is President Muhammadu Buhari. We told him to his face that we would not follow him to contest against Buhari. That is what informs our collective decision today, to decamp to APC,” he said.

“All of us believe in the good work President Muhammadu Buhari is doing for national development. We are also aware of the feats achieved by governor Abdullahi Umar Ganduje in Kano. With these things, we just resolved to cross carpet and join hands for the development of our fatherland,” he said.

It is not clear if the defectors joined the PDP few weeks ago like Mr Kwankwaso before yesterday’s event or if they were lured by state officials to partake in Wednesday’s event. But the event signifies the depth of division that was once in the ‘Kwankwasiyya’ movement of Mr Kwankwaso before his problem with Mr Ganduje and his eventual defection to the PDP.

Mr Kwankwaso declared his intention to vie for the presidency in 2019 before a mammoth crowd at the Chida Hotel, Abuja on Wednesday.

However a PREMIUM TIMES report indicated that the same facility had been used in the past on weekdays for political events, some by the APC.

A last minute attempt, a few weeks ago by President Buhari, who is also recontesting, to dissuade Mr Kwankwaso from leaving the ruling APC failed as the lawmaker decamped shortly after.

UN chief thanks Obasanjo for smooth transition in Liberia